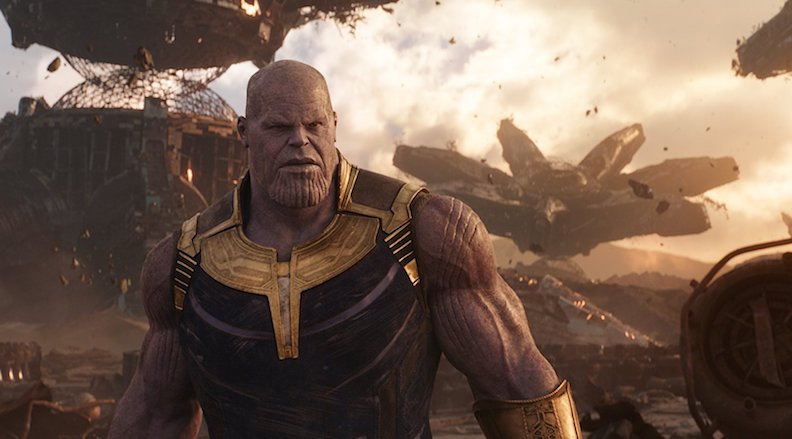 “It’s like a pirate had a baby with an angel.”

Earth’s Mightiest Heroes span the cosmos in an effort to stop Thanos, the mad Titan, from his plans to wipe out half of all life.

This is a film that I already REVIEWED, on its opening weekend. Eight months later, my opinions on the film haven’t changed all that much. The benefit of having seen it a few more times, though, has given me some more perspective on one of the most anticipated films of the last decade.

AVENGERS: INFINITY WAR really is an impressive film. It manages to tie in disparate stories from 10 years’ worth of movie build-up, and they all gel fluidly. Screenwriters Christopher Markus and Stephen McFeely needed to get in about 30-35 characters from previous films – plus some new ones – in the largest superhero ensemble ever attempted. Even the slightest misstep with one scene could have caused the film to unravel, but that never happened.

Even on rewatch, Chris Hemsworth’s Thor takes the movie from great to amazing. Thor’s quest to avenge his brother’s death and take Thanos down after the whooping he took at the start of the film is the thread that ties the whole movie together like The Dude’s rug.

Hemsworth is ridiculously talented, and every scene he’s in is a highlight. Teaming him up with the Guardians of the Galaxy – namely Rocket Raccoon and Baby Groot – was genius, because it allowed him to explore the more comedic side of Thor’s character that we got to see in THOR: RAGNAROK. But then he gets his axe and makes his way to Earth and the God of Thunder is all business and starts destroying people. Every single moment is fantastic.

And then there’s Chris Evans. CAPTAIN AMERICA is the heart of the Marvel Cinematic Universe, and it’s already a little broken after the events of CIVIL WAR. But Cap keeps fighting the good fight, showing up where he’s needed to help his friends and keep the world safe. Despite the Avengers having disbanded, the heroes of the world still treat him with reverence, but Cap takes it in stride. There are few actors who could pull off going toe-to-toe with Thanos and responding to Baby Groot’s “I am Groot” with “I am Steve Rogers” in the same scene, but Evans does it perfectly. I only wish we got more of him here.

Since we’re talking about Chrises, I suppose we should throw in Chris Pratt’s Peter Quill. I know we’re all supposed to love Pratt because of PARKS & RECREATION and Andy and April, but if we were going to get a member of Pawnee Parks Department to try and save the world, why would we go with Andy Dwyer when Ron f’ing Swanson is right there?!?! Admittedly, I still haven’t seen any of the GUARDIANS OF THE GALAXY movies (maybe one day it’ll win a poll), and I’m pretty sure Peter Quill is supposed to be a vaguely unlikable douche nozzle. And Pratt does a perfect job at being a screw-up that you’re yelling at him when he confronts Thanos on Titan, with his other heroes getting close to taking the gauntlet off his hand. You just know he’s going to screw it all up and it is so very frustrating.

But it works in the context of the story being told, just like everything else about this movie.

Truth be told, I think I like INFINITY WAR even more now than I did back then. Even the ending, which I originally found to be a little disappointing, has grown on me. But that may also be because the sequel, which finally has a TITLE, is only about four months away. We’re finally going to see how the story that began with IRON MAN back in 2008 ends. I have a feeling I’ll watch INFINITY WAR a few more times before END GAME finally gets to theaters.