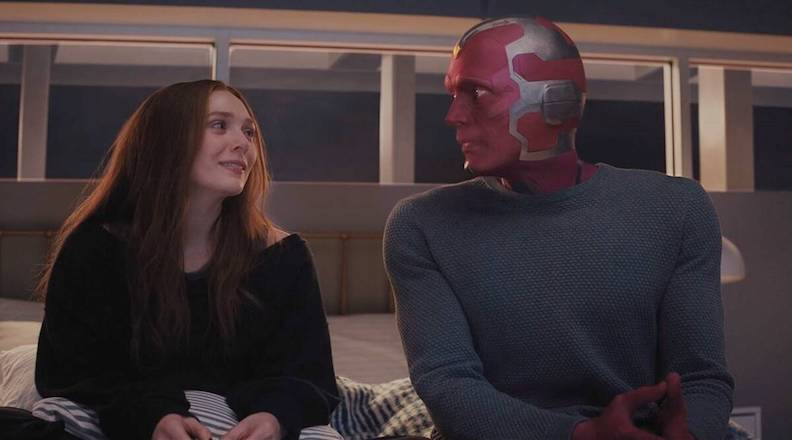 The penultimate episode of the Disney+ limited series gives us a little bit of a history lesson, not just in the life of Wanda Maximoff, but also on newly-revealed villain Agatha Harkness, who spent most of the series pretending to be Wanda’s closest friend and next door neighbor. Secretly, though, she was manipulating things in the hopes of enacting her own selfish agenda.

With Wanda in her basement, unable to wield her chaos magic because of the protection spells, Agatha begins the classic villain monologue. She reveals her intentions to Wanda. As a magic user herself, Agatha wanted to know how Wanda was able to create and manipulate the town of Westview to her every whim. Ostensibly, Agatha wants that kind of power to herself and delves into Wanda’s history to see what led Wanda to these abilities.

Much like her comic book counterpart, Agatha Harkness is pretty old. The opening of the eighth episode takes us back to Salem, Mass. in 1693. Agatha is tied to a stake, surrounded by a group covered in cloaks. But this isn’t the Salem Witch Trials that we are familiar with. Instead, it is a trial, conducted by witches in Salem, accusing Agatha of violating the rules of her coven. The trial doesn’t end well for the accusers, with Agatha sucking up their life force and flying away.

Most of the rest of the episode is devoted to Agatha’s exploration of what brought Wanda to this stage in her life: the death of her parents; getting imbued by the Infinity Stone that upped her power levels; her growing relationship with Vision; and, finally, how she tried to get Vision’s body back from S.W.O.R.D. and ultimately took over the town of Westview.

Unlike the flashbacks we got in EPISODE 4, none of this is really new information for anyone who’s been invested in the Marvel Cinematic Universe – or at least the Avengers movies. Wanda’s origins and her relationship with Vision have already been well-documented, except maybe the backdrop of Wanda’s enjoyment of sitcoms. It might be a good primer for people who may not have been following along, but as the penultimate episode, catching people up may be a bit too late, though its place makes sense in the narrative.

This, unfortunately, felt too much like a filler episode before the final episode brings everything home, but the post-credits reveal of S.W.O.R.D. Director Hayward bringing a white Vision online certainly raises the stakes. With Monica Rambeau still in Westview after getting captured by fake Pietro (“Fietro,” Agatha called him) and Dr. Darcy Lewis on the outskirts of town as Wanda’s Vision makes his way back to their house, the final episode should be action-packed.

But the various players being in position begs the question: who is the true main villain of WandaVision?

After this episode, it seems like speculation that it would be Wanda is misguided. She’s clearly a very powerful woman who has suffered greatly throughout her life, and is using her powers to give herself a level of comfort. Agatha finally gives her powers the chaos magic moniker and also names Wanda the Scarlet Witch for the first time here.

I also don’t believe Agatha Harkness is the big bad, either. While she’s clearly evil and has caused some bad stuff in Westview, it seems as though her motives are entirely her own. Harkness wants Wanda’s power levels, but doesn’t seem to necessarily want them for anything other than her own selfishness. We saw her wipe out her whole coven at the start of the episode, and she’s clearly already very powerful. She must be approaching at least 350 years old here – if she wanted to take over the world she could have much more easily done it long before the age of the Avengers.

And since we haven’t gotten a more concrete hint of Mephisto, I’m not sure we can count of him being the big bad, unless he’s still hidden and will reveal himself sometime next episode as one of the characters we’ve already met.

No, I think that once again Marvel Studios is attempting to confound some expectations. It seems as though the real big evil for WandaVision will be S.W.O.R.D. director Wayword himself. After getting a sympathetic vibe from him when he was introduced in episode 4, he’s grown slowly more evil – in a bureaucratic way, but still evil. He even lied about Wanda stealing Vision’s bod, as we find out this episode. Maybe Hayward gets revealed as Mephisto next episode, but that feels unlikely at this point. The Marvel movies seem to have a pretty big problem with governmental authority, as malicious government agencies and officials have been a major part of the narrative up to this point.

At the very least, an evil Hayward may lead us to a cameo from Samuel L. Jackson’s Nick Fury at the end of the episode, to start the build to the upcoming Disney+ Secret Invasion series.

There’s going to be a lot of speculation over the next week over what’s going to happen, but I’m willing to bet that the final episode will offer up just as many questions as it does answers as the next phase of the Marvel Cinematic Universe kicks into the next gear.

Oh hey, is that Dr. Strange in the teaser for next week’s episode?