WandaVision Episode 4 – “We Interrupt This Program” 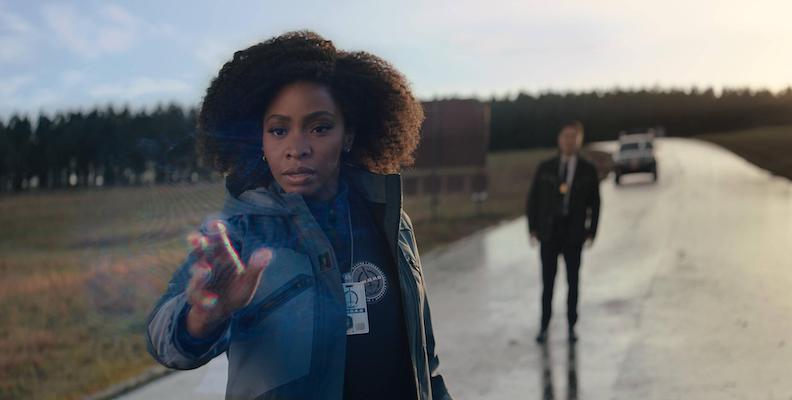 After watching a series of homages to classic eras of television, the Disney+ series shifts to the world outside of the small town of Westview to let viewers in on what, exactly, has been happening.

The fourth episode of the limited series event answered a lot of questions about the setting and the premise behind WandaVision’s first three seasons. Despite clearing up a lot of confusion, there’s still a long way to go before we get any kind of resolution. And I am so much more hooked than I was even after the LAST EPISODE.

Instead of focusing on Wanda and Vision inside of Westview, we instead get a look at Wanda’s friend Geraldine (Teyonah Parris), who is not actually Geraldine at all. No, she’s Monica Rambeau, the daughter of Captain Marvel’s Maria Rambeau, who was blipped out of existence at the end of INFINITY WAR. When she came back, five years later, she discovers her mother had died two years after her disappearance and, really, the whole world had changed quite a bit.

Getting the chance to see the repercussions of Thanos’ finger snap – and then how people deal with half the world’s population coming back – is filled with possibilities. We only get a glimpse of the chaos here, like we did in SPIDER-MAN: FAR FROM HOME, as Monica was in a hospital with her mom when she blipped, like dozens of others. Their sudden reappearance leads to even more chaos as the hospital struggles to keep up with everything that’s happening.

While it was likely too small a story to be told on a big screen in a Marvel blockbuster, I do hope the Disney+ shows find a way to incorporate more stories about the MCU’s “Blip Years.” Even a series of shorts showing how characters we know were affected by it could be fascinating. Until that happens, I’ll have to be satisfied with moments like this episode’s opening.

Back from the blip, Rambeau goes back to work at S.W.O.R.D. – the MCU’s Sentient Weapon Observation and Response Division – and her first mission back sends her on a missing persons case in New Jersey. Right outside Westview, a town that the local sheriffs swear doesn’t actually exist. And when Rambeau goes to investigate, she gets sucked into the town, prompting a joint operational response from the FBI, S.W.O.R.D. and other agencies, which we saw at the end of the third episode, camped outside of town.

As part of the response team, the series brings back some supporting characters from other MCU films. Kat Dennings reprises her role as Dr. Darcy Lewis from the first two Thor movies. We’re also reintroduced to FBI agent Jimmy Woo, played by Randall Park. While it’s great that Park now has a recurring role in the MCU, I’m still always going to think of him as the guy who punched Keanu Reeves and wrote a song about it in the ridiculous Netflix rom-com Always Be My Maybe.

Sometimes those Netflix rom-coms are worth it. Sometimes.

While most of the response team is at a loss for what’s happening inside Westview, Dr. Lewis manages to figure out how to use an old television to see inside. The resulting images that come through are probably more confusing to them than the sitcom homages are to us.

The response team outside Westview also begins to identify the supporting characters inside, determining that they’re all being forced to play roles to give Wanda her perfect life. The one player who isn’t identified, curiously, is Katheryn Hahn’s Agnes, which suggests there’s more to her than we’re yet allowed to know.

The biggest confirmation we get out of episode 4 is that, yes, Wanda Maximoff is the one causing all of this. While we don’t know for sure why she’s doing it, the simplest explanation is probably the closest to the truth: the battle with Thanos and the loss of Vision likely broke her. Her response was to create a new reality for herself, one where Vision is alive and well and they have a happy life together.

Now that many of our questions about what’s going on in Westview have been answered, the back half of the season will likely include some making some tough choices. How does one deal with a person who is so powerful, she can create her own localized reality? Especially now that the Avengers’ biggest players are off the board? Captain America, Iron Man, Black Widow and Thor are all gone.

Hopefully they have Doctor Strange’s number.