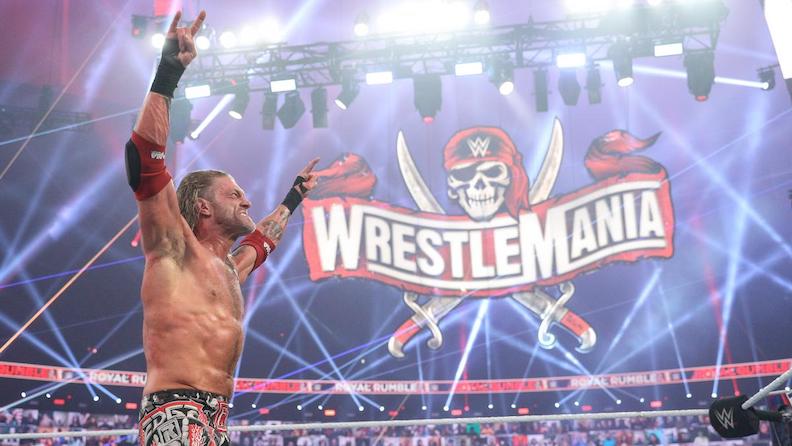 The snowfall may be pretty heavy here in Queens on this cold February morning, but on this day, I see clearly. Edge is going to WrestleMania! Why? I don’t know, but 11 years to the day of the Rated R Superstar’s first Royal Rumble win, we get a repeat performance.

Edge kicked off the 34th annual men’s Royal Rumble at number one, with his recent rival Randy Orton at number 2. The former tag team partners went at each other viciously at the start of the match, with Edge eventually injuring Orton outside and causing the Viper to be helped to the back. Returning from yet another injury, Edge managed to stay in a prone position in the corner for most of the match, giving him the chance to last til what we belived was the match’s Final Four: Edge, his former partner Christian, Braun Strowman and Seth Rollins. Edge was the last man left after getting rid of Rollins, but then Orton slithered back in the ring to hit Edge with an RKO… wait for it… OUTTA NOWHERE! Orton was almost immediately thrown out after that.

After a few years of fairly strong men’s Rumbles, this one honestly left me a little cold, but that may be because I haven’t been as high on the Edge-Orton “Greatest Feud Ever” feud, which was set up at last year’s Rumble. There were some fun surprises – Christian’s return along with Carlito and Hurricane coming back was great to see. But I think the Rumble is at its best when it’s elevating a new superstar to the main event, much like it did last year with Drew McIntyre. And with all the talk about a third match between Edge and Orton planned before Edge’s last injury, I also assume Orton will find a way to win the WWE Championship from McIntyre at some point in the next month or two to establish the final match in the trilogy. And that’s also an underwhelming title program for me. But your mileage may vary.

Best Match: Universal Championship Last Man Standing Match: Roman Reigns (c) defeated Kevin Owens – WWE has been using a lot of Last Man Standing matches the last few years and it’s a very difficult needle to thread, keeping the match exciting while frequently stopping the momentum to allow the referee to administer a 10-count to declare a winner. But with nearly all things involving Roman Reigns lately, the Head of the Table makes it work.

Reigns and Owens battled beyond Thunderdome into the backstage area, giving me one of my favorite visuals of the match: Owens climbing up a forklift to jump off an elevated pallet, diving onto Reigns and putting him through a table with Tropicana Field’s outfield in the background. We’re lucky he didn’t hit one of the catwalks, or else he would have been called out on the play.

Owens managed to handcuff Reigns to a stanchion, hindering his ability to get to his feet, but the champ knocked the referee out to give advocate Paul Heyman a chance to use a key to get him out. The timing on the handcuff sequence was definitely a little off, and it required everyone to cover a bit, but that didn’t take away from the overall quality of the match. Reigns escaped, locked Owens in a guillotine choke and ended the threat. I hope Reigns keeps the title for a while, because no one else on the roster is at his level right now.

Worst Match: SmackDown! Women’s Championship Match: Sasha Banks (c) defeated Carmella – I am no big fan of Sasha Banks. I’m even less a fan of Carmella, who keeps getting cycled in and out of main event matches despite not really being any good. She’s trying to recreate the magic she had with James Ellsworth with her new sommelier Reginald, and it just feels less than. The champion did a good job of elevating Carmella’s game a bit, but I wasn’t feeling this match.

Video Game Challenge – The 2021 show started off with the WWE Championship match between champion McIntyre and his challenger, Goldberg. The match was nothing more than a contest from a WWE video game with the finishing move slider moved to infinite: Headbutt. Spear. Spear. Claymore. Kickout. Reversal. Spear. Spear. Kickout. Taunt. Jackhammer. Kickout. Claymore. Win.

That was the whole match, even including the action before the bell when Goldberg speared McIntyre through the barricade at ringside protecting the Thunderdome screens. I definitely didn’t need a 20-minute Goldberg match, and I assume Goldberg didn’t need it, either, so it was perfect for what it was. Amazingly, Goldberg fails to win the WWE Championship and gives McIntyre a show of respect after the pin.

If McIntyre is going to end up defending the championship against Edge at WrestleMania, at least we know he can withstand some pretty vicious spears. But I still think he’s losing the title to Orton again at some point.

The Better Rumble Match – With Geekery favorite Bayley entering the match at number 1, I was looking forward to a wire-to-wire performance from our Role Model to send her to WrestleMania so she can get revenge on Sasha Banks, who took her title at HELL IN A CELL. Alas, that was not to be. Instead, we got a very impressive performance from the third entrant, Bianca Belair, who set the women’s distance record with almost 57 minutes in the match and four eliminations to get the win.

The women’s match had a much better story throughout the match, as the focus cycled perfectly, giving us some nice surprise returns (including Torrie Wilson, Jillian Hall and Victoria) and shining the spotlight on a number of superstars during the match. We saw a lot of storyline progression, including the Charlotte-Lacey Evans feud and the Lana-Nia Jax feud. Although, with Lana managing to eliminate Jax, after she was the sole survivor on her SURVIVOR SERIES team, it looks like Lana has finally won that feud.

In the end, Belair teamed up with Rhea Ripley to eliminate last year’s winner, Charlotte Flair. Belair followed it up by taking Ripley out and earning the right to challenge the champion of her choice at WrestleMania. I assume she won’t challenge the NXT Women’s Champion like Charlotte did at last year’s WRESTLEMANIA.

We Interrupt This Rumble – After Alicia Fox entered the match at number 21, 24/7 Champion R-Truth came out, thinking it was the men’s match. When he got to the ring and saw the women in the ring, he shouted out, “Wrong Rumble!” But by then, the gaggle of usual 24/7 challengers had already followed him down to ringside and chaos ensued. Fox ended up pinning Truth to win the title, but she was eliminated from the Rumble shortly after. And then Truth pinned her to regain the title. Truth didn’t leave the Rumble with his 24/7 title, though. After the match, pre-show roundtable member Peter Rosenberg tricked Truth and got a pinfall, running out of Tropicana Field with the title.

Rosenberg winning prompted two of my favorite lines of the night. First, Truth declared, “I’mma get you Michael Kay!” invoking the name of the New York Yankees broadcaster and Rosenberg’s radio co-host. Then, when it was thrown back to ringside, color commentator Corey Graves bemoaned, “David Arquette is off the hook” for being the worst non-wrestler champion.

Get Out of Here – In winning their respective Rumbles, Belair and Edge also earned the Iron Woman and Iron Man awards for longest time in the match this year. I won’t recognize Orton’s official tied time in the match, since he spent most of it in the backstage area. They did not, however, win the award for most eliminations. In the women’s match, NXT’s Rhea Ripley has top honors with 7. Shayna Baszler, who won the tag team titles with Nia Jax in the preshow from Charlotte and Asuka, came in second with 6. For the men, two men are tied for a very low elimination number: Intercontinental Champion Big E and NXT’s Damian Priest both had 4 eliminations. Second place went to four different men with three eliminations each: Edge, Seth Rollins, Braun Strowman and United States Champion Bobby Lashley.

*DISCLAIMER* The rankings are for discussion purposes only and in no way reflect an official or authoritative list. It is simply my opinion. If you disagree, let me know in the comment.

That’s all for the 2021 Royal Rumble! We’ll be back next month with a look at the upcoming NXT Takeover and the WWE Elimination Chamber! Stay tuned!