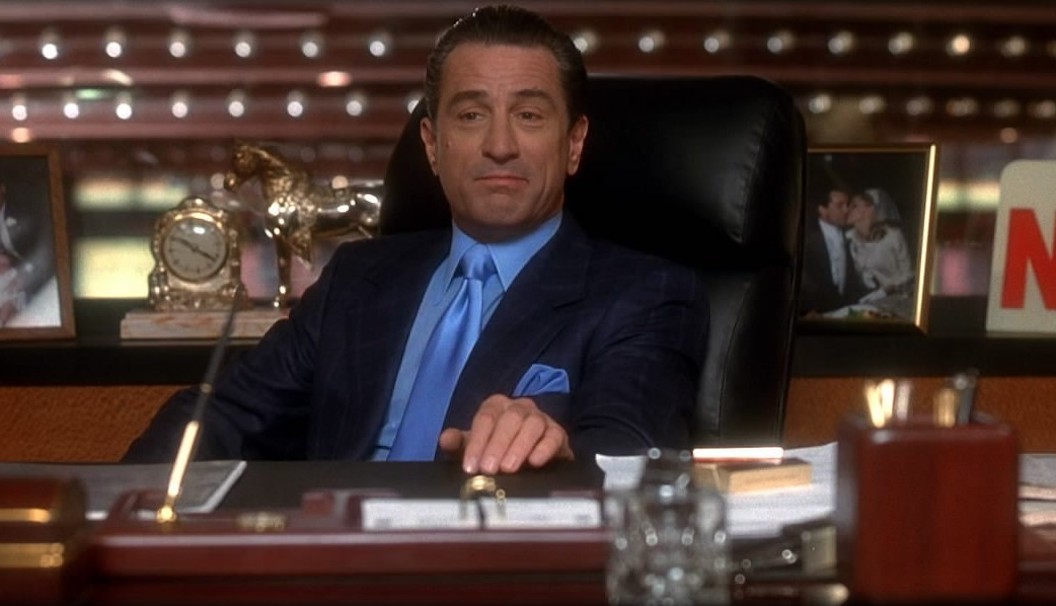 “A lot of holes in the desert, and a lot of problems are buried in those holes. But you gotta do it right. I mean, you gotta have the hole already dug before you show up with a package in the trunk. Otherwise, you’re talking about a half-hour to forty-five minutes worth of digging.”

Two mobsters move to Las Vegas in the late-1970s and their relationship gets tested through their direct and indirect involvement in the casino business. Sex and drugs create problems for everyone, not so much the rock ‘n’ roll, though.

Casino (1995)
Directed by Martin Scorsese
Written by Scorsese and Nicholas Pileggi, based on the book by Pileggi.

Honest question: does Scorsese realize that movies can be shorter than two-and-a-half hours? It takes a pretty serious commitment to take the time and watch a whole Scorsese movie. Clocking in at around three hours, CASINO follows a pretty typical formula for a movie of this ilk: bad guys prosper in a new environment; the foundation starts to crack when the bad guys stop working together; and then everyone dies. Like, violently.

I hope that didn’t spoil the movie too much for everyone.

That’s not to say this isn’t a good movie. It’s a well-done movie with a fantastic cast. Robert De Niro and Joe Pesci star as the guys who come in to Vegas and start to gain some money, power and influence over the town. Ace Rothstein (De Niro) takes over as the head of a casino while Nicky Santoro (Pesci) starts to run the city’s organized crime. Rothstein tries to keep the appearances of respectability, which means distancing himself from Santoro, who thinks he deserves more power and respect than he actually gets. Santoro’s Napoleon Complex starts to affect his relationship with Rothstein, who he’s known for 35 years.

Sharon Stone’s Ginger adds some complications to Rothstein’s life, too. Stone plays a hooker that Rothstein falls for. But even though Ace marries Ginger and gives her everything she wants, the hooker feels stifled and tries to rebel against everything involving her husband. When Ginger finally ends up dead at the end of the movie, it feels like a relief for everyone involved.

The best part of the movie comes when Scorsese decides to fool around with the typical format. Rothstein and Santoro take turns narrating the film, which typically clues the viewer in that nothing too bad is going to happen to them. And for the most part, that’s true. Rothstein and Santoro survive through almost all the way to the end. And then, while Santoro is narrating over a meeting in a cornfield, the character gets whacked in the head, causing his narration to get interrupted. It’s a nice little touch that lets you know that Scorsese knows what he’s doing, even if it seems like he’s on autopilot.

I wouldn’t have minded if the movie was a little bit shorter than it was, but CASINO still told a great story with an exceptional cast. If you’ve got the three hours, it’s worth the time to check it out.