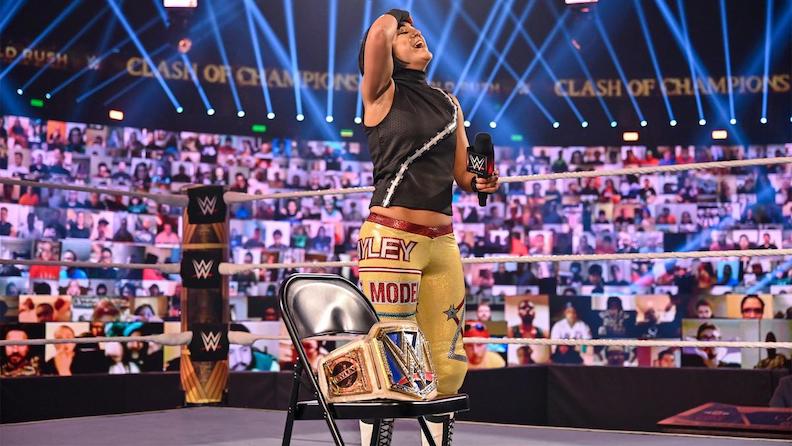 Coming to you from the Thunderdome in Orlando, the latest WWE Network Special features championship matches up and down the card, and it’s highlighted by the family feud between WWE Universal Champion Roman Reigns – flanked by his special counsel Paul Heyman – and his cousin, Jey Uso, in Uso’s first-ever singles championship match.

I don’t think anyone watching this show expected Uso to come out of this on top. He’s been a tag team wrestler since he made his main roster debut in 2010. In fact, the whole story of the match was that Uso was out of his league challenging his cousin, a multi-time champion who’s been in the main event almost his entire WWE career. With the exception of some offensive flourishes from Uso, Reigns dominated the match, talking smack at his cousin for even thinking he could challenge the “Tribal Chief.” Reigns wouldn’t even deign to pin Jey, prompting twin brother Jimmy to come out to throw in the towel to give Reigns the win.

The match took a while to get going, really gaining life when Jey finally started to get some offense, but it was never meant to be a match of the year candidate. This was booked to get Reigns over as a dominant heel champion, and to push his new “Tribal Chief” persona. When Heyman dropped the lei around Reigns’ neck at the end of the match, it felt like Reigns had finally arrived as the company’s top talent, which WWE had been half-assed teasing for quite some time now.

As an angle, this did everything it was supposed to, but it was a bit deflating as the main event of the show. Reigns was put over strong, but there was never any question that he was going to walk out of the match with the championship, and I think the WWE Championship match had much more “anything can happen” energy that would have been a better close to the show. But more on that later.

Best Match – Intercontinental Championship Triple Threat Ladder Match: Sami Zayn defeated Jeff Hardy (c)  and A.J. Styles – The ladder match kicked off the show, and there wasn’t anything on the card that was going to come close to topping it. Hardy has made a career out of ladder matches, Zayn can hold his own and Styles has been the company MVP since his debut. And it had a creative finish, with Zayn pulling out 2 pairs of handcuffs – one that went in through Hardy’s ear piercing! – and making sure his opponents couldn’t catch him as he climbed up the ladder to grab the win. The match went nearly a half an hour – and it probably would have been as good or better with a little less time. Regardless, the match was still head and shoulders above anything else at the show.

Worst Match – Raw Women’s Championship Match: Asuka (c) defeated Zelina Vega – Nothing against Asuka or Vega here, but this was another case of no one believing the challenger had a chance and, again, no one was wrong in believing that. Asuka outclassed her the entire match.

More Asuka – With the SmackDown! Women’s Championship Match between Bayley and Nikki Cross cancelled because of Bayley’s attack on the challenger, the champ issued an open challenge, which she quickly closed. But the Raw Women’s Champion came down and the two had a match that was, again, more angle than anything else. Bayley gets herself disqualified and as she tried to escape, her former best friend Sasha Banks came in and attacked. Banks was still wearing a neck brace to sell the effects of Bayley’s turn on her, but managed to get the better of the champion with a steel chair and a kendo stick. Bayley-Banks is the hottest story WWE has going, and here’s hoping Bayley manages to break Banks in half.

A Little Help From His Friends – The match that SHOULD have been the main event – the WWE Championship Ambulance Match between champion Drew McIntyre and Randy Orton – was a lot of fun, and I think most people expected WWE to use the stipulations to give Orton the title without hurting Drew, but the company went another way here. McIntyre – fighting with a kayfabe broken jaw – battled back from an Orton beating, but had a little help. Big Show, Christian and Shawn Michaels all found a way to get revenge on Orton during the match, after Orton had hurt them all over the last few weeks. After HBK gave Orton some Sweet Chin Music and pushed him off the top of the ambulance, McIntyre delivered a couple of vicious kicks to the Viper and slammed the ambulance door shut. When the referee told the ambulance driver to get it out of the arena, we got the reveal of Ric Flair as the driver, to fully pay off the story. McIntyre may have needed some assistance to beat Orton, but he still managed to look strong in his win.

What Was That? – The Raw Tag Team Championship match between champs the Street Profits and challengers Andrade and Angel Garza was a fast-paced match that had a lot of potential. The challengers – who had been perpetually breaking up for months – seemed to be on the same page and looking like they may finally be able to beat Montez Ford and Andre Dawkins, until Ford got a hot tag to Dawkins. One spinebuster later and the match was over, even though Andrade had his shoulder up at 2. Everyone was a little confused, from the guys in the ring to the announce team.

One More Time – Bobby Lashley put his United States Championship on the line one more time against Apollo Crews in yet another feud that just won’t end. Even though Crews had Ricochet in his corner, it did nothing to give him an edge against the guy who’s definitely had his number for months. Lashley wins with the full nelson and maybe we can get a different match-up sometime soon.

The Clash of Champions 2020 Rankings