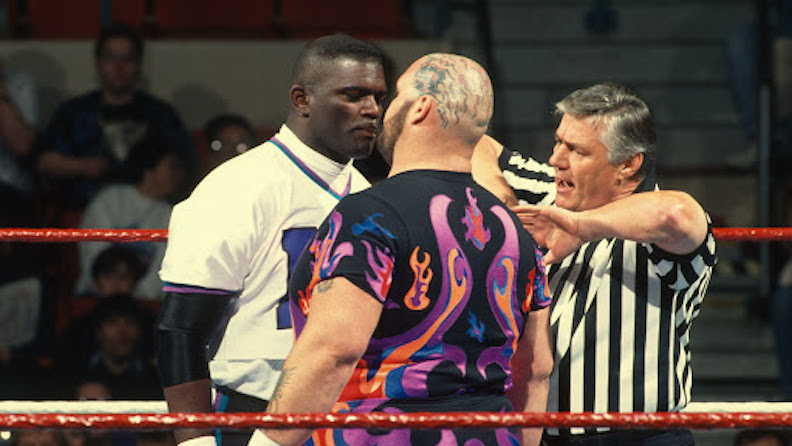 Something happened as the calendar turned from 1994 to 1995, and I don’t think it was a good thing. The WWF was in the middle of rebuilding after most of its stars from the late-1980s and early-1990s defected over to WCW. And while WrestleMania X was almost universally praised as a great show and a key kickoff for the “New Generation,” WrestleMania XI felt like a throwback to WrestleMania 2 – an underwhelming card where a lot of focus was put on football players.

With only seven matches on the card (and a lack of stars to focus on adding more matches anyway), the show was more focused on celebrity interactions, with a number of backstage segments with NYPD Blue’s Nicholas Turturro, MTV’s Jenny McCarthy and Home Improvement’s Jonathan Taylor Thomas. This would all be forgiven if the matches were top notch contests. This is, of course, not the case.

Best Match: Diesel vs. Shawn Michaels – WWF Title Match. The story between these two former partners was actually built very well, from the moment Diesel won the Intercontinental Title from Razor Ramon almost a year prior. While this match pales in comparison to the “Good Friends, Better Enemies” brawl the two had a year later, it is easily the best match on this card. I remember being all in on Shawn Michaels beating Diesel when the match happened. Losing the main event, Michaels went away for a while and came back as a babyface, which made him a whole lot less interesting… to me, anyway.

Worst Match: Bret “Hitman” Hart vs. Bob Backlund – I Quit Match. This is not a condemnation of Bret Hart or Bob Backlund. This is a condemnation of the way the match was built and the way special referee “Rowdy” Roddy Piper inserted himself into the match. Constantly questioning if Backlund and Hart give up and sticking the microphone in their faces ruins the potential flow of the match and makes sure that nothing ever builds to anything even approaching good.

The Super Bowl of Sports Entertainment: Bam Bam Bigelow main evented a WrestleMania. Think about that. The most hyped match of the show featured Bigelow taking on New York Giants legend Lawrence Taylor in a grudge match that came about from a spat after an undercard tag team match at the ROYAL RUMBLE. Sure, Taylor far exceeded expectations and the pair put together a pretty good match. But still, the main event of WrestleMania featured a midcarder facing a football player. The person involved in the match who ended up in the best position was Steve “Mongo” McMichael, who parlayed an appearance as a member of LT’s All-Pro Team to being a lead commentator on WCW Monday Nitro just five months later.

Height Of Mediocrity: I feel like I’ve already spent too much time talking about one of the dullest WrestleManias of all time. The seven matches on the show feature a mediocre title change (Yokozuna and Owen Hart beating the Smoking Gunns), a mediocre Undertaker match (against King Kong Bundy, with future WWE Hall of Famer Charles Wright stealing the urn) and a mediocre opening tag team match (Lex Luger and British Bulldog vs. Jacob and Eli Blu). Really very little to discuss.

Next up, 1995 gets extreme with ECW’s Three Way Dance! Stay tuned!