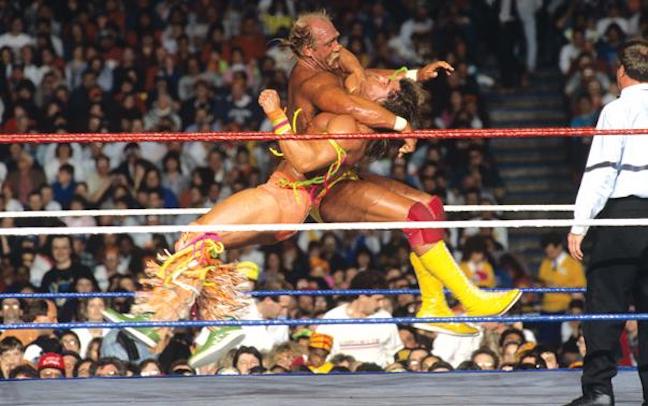 By the end of 1989, Hulk Hogan had beat all the big heels in the WWF. Savage, DiBiase, Andre, Bad News Brown. Even Zeus! Hogan had beat them all. So who do you put in the main event of the biggest show of the year? Well, you put in your second biggest babyface act, of course! The WWF risked splitting its fan base in order to put the best match on the card for WrestleMania VI. Hogan vs. The Ultimate Warrior. Champion vs. Champion with both titles on the line!

I couldn’t see the World’s Champion losing to the young upstart as a kid and couldn’t wait to see what Hogan did with the Intercontinental Title (Also, if they were just going to strip the winner of the IC Title, why put it on the line in the first place? Why would Hogan WANT the IC Title? Just to rub it in Savage’s face that he had both titles now? I’m overthinking this…).

For the second year in a row, though, the show featured a great main event but a lackluster undercard that produced very few positive memorable moments.

Best Match – Hulk Hogan vs. Ultimate Warrior, WWF Title vs. Intercontinental Title. The main event saves this show from wading completely in mediocrity. This has to be Ultimate Warrior’s longest match (it’s about 2 minutes longer than the WrestleMania VII match against Savage) and the two guys who no one expects to have great matches pull out all the stops to mix some brawling and technical acumen. As a young Hulkamaniac, I was a little heartbroken. It’s the last real “epic” WrestleMania main event for a number of years.

Worst Match – “Rowdy” Roddy Piper vs. Bad News Brown. This match went nowhere, solved nothing and meant even less to the long-term WWF creative bottom line. The match is the pits and most people only remember it for Piper’s ring outfit. Which leads me to…

It Doesn’t Matter If He’s… – Piper has never been the most culturally-sensitive guy at WrestleMania, but for the most part he was a heel when he spouted his more racist interviews. Here, as a face, Piper comes out with half of his body painted black in what might be his most offensive stunt yet for his match against Bad News Brown. Later, during the match, Piper pulled out what looked like one of the Rockers’ fingerless gloves (“It’s a Michael Jackson glove!”) to assault Bad News with. Why you would want to further enrage an angry Black man like Bad News by coming out in Black face is beyond me, but it makes me think Bad News may have had a point when he was complaining about the WWF’s biases…

Say Goodbye – When Gorilla Monsoon and Jesse Ventura announce the location of WrestleMania VII, Ventura talks about how excited he was to be in “his town” of Los Angeles next year. That would, of course, not come to pass, as Jesse had a falling out with Vince McMahon and was gone by the summer of 1990. Bobby “The Brain” Heenan would slip into the broadcast booth with his friend Monsoon the next two years.

50-50 Booking? – Brutus “the Barber” Beefcake handed “Mr. Perfect” Curt Hennig his first televised pinfall loss at WrestleMania VI. Of course, this means that Hennig was in the, ahem, “perfect” spot to win the big Intercontinental Title Tournament held the month after the show. The other person in the finals? Tito Santana, who lost here to the Barbarian. Maybe the finals of the tournament should have been Beefcake vs. Barbarian. Naaaah…

Next week, the AWA enters the mix with SuperClash IV!