Clash of the Champions X 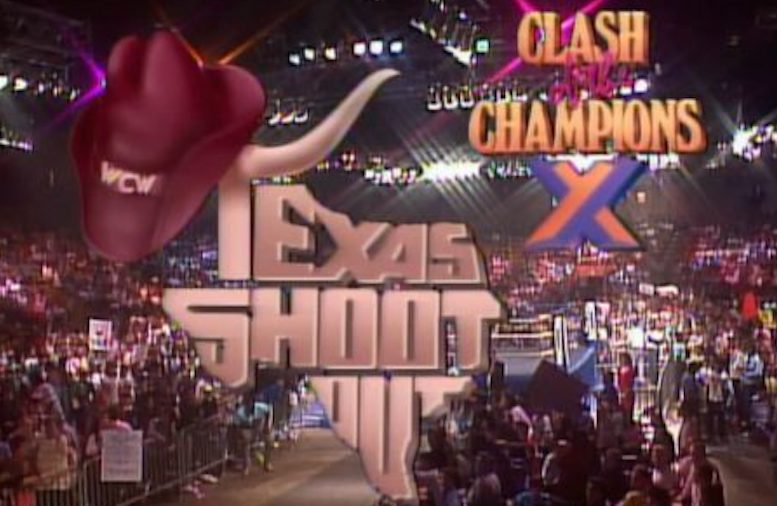 The first NWA/WCW show of the 1990s was the show that got me hooked on the WWF’s main competition. I had watched the Saturday night show every now and then, and I had caught a Clash or two before this one, but this was the one that really got me. The story of the Four Horsemen, led by World Champion “Nature Boy” Ric Flair, kicking their newest member, Sting, to the curb was so well-done and it built to a perfect crescendo over the course of the night.

Sting, who had been a member of the Horsemen for a couple of weeks after beating Flair in the Iron Man tournament at Starrcade 89, was set to challenge for Flair’s title at the next pay-per-view, and Flair and the Andersons didn’t take kindly to that. They kicked Sting out of the group (and the main event) and mugged him a bit during an interview with Terry Funk, and then Sting tried to involve himself in the main event six-man tag team cage match between the Horsemen and the J-Tex Corporation. They built up Sting so well as the young lion coming for the old guard and they got me fully invested in the story. Unfortunately, Sting messed up his knee and was forced out of action until July, but it didn’t ruin the momentum that NWA/WCW had coming out of this show.

Best Match: NWA Tag Team Championship Match: The Steiner Brothers defeated Doom – Tag team wrestling in the NWA/WCW was one of the best things about the promotion, and the Steiners were head and shoulders above just about everyone. And the ongoing story of their feud with Doom – Ron Simmons and Butch Reed under masks – was another thing that had me intrigued. Led by Woman, who debuted as a fan named Robin Green who was flirting with Rick Steiner, Doom was a great badass team and they always had fun matches with the Steiners. Simmons and Reed put their masks up against the titles here, and match built to the moment when Rick pulled off Reed’s mask, leading to a roll-up win for the champs. But Doom’s best days were yet to come.

Worst Match: “Flyin’” Brian Pillman and The Z-Man defeated the MOD Squad – OK, so not all tag matches were created equal. This was just a squash match to push Pillman and the Z-Man as contenders to the U.S. Tag Team championship. But it was still pretty mediocre.

“Cactus Jack is Dead!”: There are so many moments from this show that are burned in my brain, but the one at the forefront is this weird looking dude from Truth or Consequences, New Mexico battling the Mexican legend Mil Mascaras. The masked man didn’t seem all that interested in being in the match, but Cactus Jack made this match, jumping off the ring and doing things that I had never seen in wrestling up until that point. Mascaras dropkicking Jack off the apron onto the floor, and color commentator Jim Cornette screamed “Cactus Jack is dead!” is a moment that’s always stuck with me. I became a Cactus Jack fan right then and there, and I made a point of following his career from that moment on.

Ranking the Clash of the Champions X matches:

It’s time to see where these matches rank in the best matches of 1990! Five of the seven matches from this show have made it into the Top 10! And we have a new number 1!

Coming up next in the 1990 Top 10, the world boxing champion steps into the ring to referee a WWF Championship match in the third Main Event!