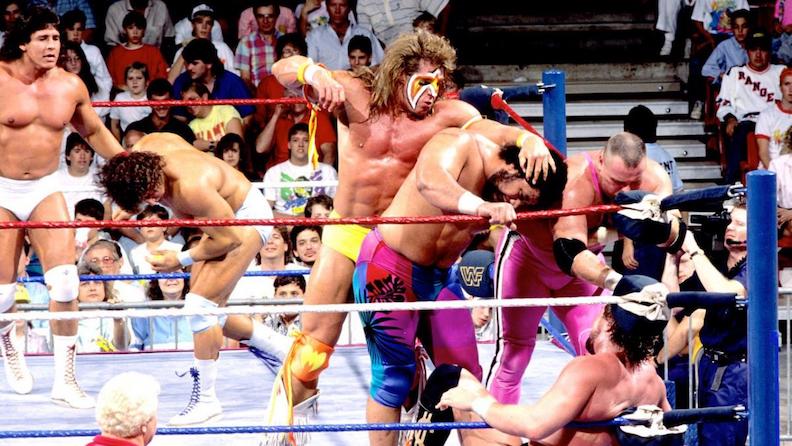 WrestleVersaries has returned for 2020, and this time we’re doing something a little bit different. Going back to the Top 10 (and later Top 20) features I’ve done for some of the WWF/WWE’s biggest events, I plan to spend the year watching the major American shows for two specific years – 1990 and 1995.

That may have been a terrible decision, but I guess we’ll have to wait and see how things go.

The Rumble was still a couple of years away from really finding its niche, which means that there are no real stakes to this show. No titles are on the line in any of the matches. In fact, all of the WWF’s male champions at the time are in the main event Rumble. Of course, WWF Champion Hulk Hogan didn’t really have a challenger at the time. He spent the second half of 1989 fighting actor Tiny Lister Jr., who played his nemesis Zeus in the cinematic classic NO HOLDS BARRED. While the Rumble would be used in later years to start a main event program by awarding the winner a title shot at WRESTLEMANIA, Vince McMahon hadn’t thought of that yet, so instead it’s another vehicle to give Hogan a big win.

The Rumble match does offer a preview of Hogan’s next big opponent, though, taking a moment late in the match to tease a confrontation with Intercontinental Champion The Ultimate Warrior, which ended in a double clothesline. Fans would get more just a couple of months later in Toronto, Ontario at WrestleMania VI.

While it’s not the worst Rumble match ever, it certainly lacks some of the stakes that would make future Royal Rumbles great.

Best Match: Rugged” Ronnie Garvin defeated Greg “The Hammer” Valentine in a submission match – This one surprised me, because as a kid I never really cared for this match. That shouldn’t be a surprise, since the WWF never really gave me a reason to care about Valentine or Garvin. The battle of the shin guards – Valentine had the Heartbreaker to enhance the effectiveness of his figure-four leglock; Garvin had the Hammer Jammer to counteract Valentine’s – is kind of goofy. But this was a pretty hard-hitting match that told a good story. Both guys spend the early moments of the match trying to pin the other, which means nothing in a submission match. Announcers Tony Schiavone and Jesse “The Body” Ventura do a good job of explaining it, since neither is really used to the submission rules, it makes sense they would go for a pin in the heat of battle. Garvin and Valentine eventually move past the pinfall attempts and move on to beating the hell out of each other, even using their respective shin guards. Garvin eventually hits Valentine with a shin guard and puts him in a Scorpion Deathlock/Sharpshooter, which Schiavone calls a “reverse figure four leglock.”

Worst Match:  Brutus “The Barber” Beefcake and “The Genius” Lanny Poffo go to a double disqualification – I am not a Beefcake hater. I can appreciate what he brought to the company in the late 1980s and early 1990s, and I can appreciate just how much fans loved him at the time. But good grief, this match is terrible. It would have been a terrible house show semi-main event and it really had no business on a pay-per-view. Poffo was great as the Genius, but for all the positives of the character, once he turned heel, his matches became painful to watch. They tried to make something more out of the match with the referee getting knocked out, Beefcake taking out the scissors and giving Poffo a haircut before the match officially ended and a run-in from “Mr. Perfect” Curt Hennig, whom Poffo managed, but it was all just useless gaga.

Strange Voices: After 30 years, it is still very weird hearing Tony Schiavone as the lead play-by-play man on a major WWF pay-per-view. The voice of WCW’s glory years spent a year in the WWF and ended up giving Gorilla Monsoon a break for SummerSlam 1989 and this show. I think Schiavone did a great job here, working well with Jesse Ventura and providing great calls for some big moments.

Oh, Brother: With only 5 matches on the card, fans were treated to a special edition of the Brother Love Show. The interview segment was a tool to get over the feud between “Macho King” Randy Savage and Dusty Rhodes, as Bruce Prichard’s alter ego teamed up with “Sensational Queen” Sherri to bully Rhodes’ valet Sapphire. While it was a treat getting to hear Rhodes’ entrance music – some of the best entrance music in the company at the time – the segment was just a little much.

Since the card was so light, the Top 10 is also a little light this time around.

*DISCLAIMER* The Top 10 rankings are for discussion purposes only and in no way reflect an official or authoritative list. It is simply my opinion. If you disagree, let me know in the comments.