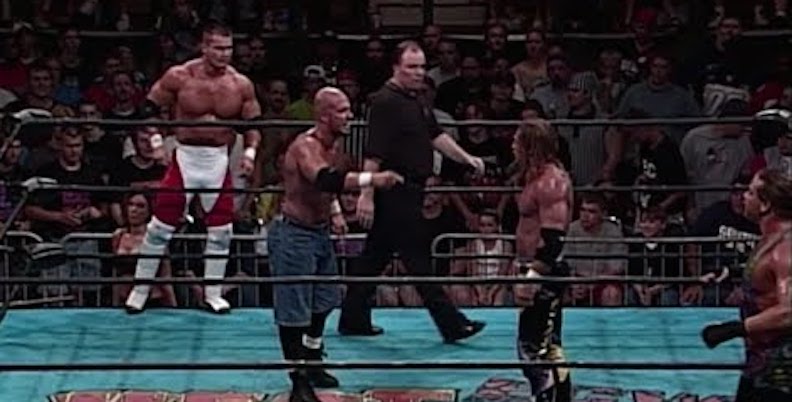 As much as I loved the old ECW syndicated television show, anything beyond the well-edited and highly stylized hour that I saw late at night on the MSG Network tended to fall a little flat with me. I’ve never seen this show before, so this will be an experience.

We start with a series of vignettes – first from Taz, then from Danny Doring with Roadkill and a pre-WWF Lita, then Nova and Chris Chetti. Paul Heyman let a guy go to the ring with only the name Jason? Is everyone getting a promo before we go to the arena for the show? There’s such a thing as overkill. Justin Credible looks like a guy who got beat up in bars A LOT before he started hanging out with bigger dudes who backed him up. Finally, the promo with Rob Van Dam and Sabu looked about as low rent and indie as you could get. But thankfully, it’s time to get to the ring for… more talking from Joey Styles.

Someone wasted time making a graphic that said “The Last July 18 of the Millennium.” Was that an important part of the build to the show? And, technically, wasn’t 2000 the last year of the millennium, because there’s no year zero?

Danny Doring and Amish Roadkill vs. Chris Chetti and Nova – Joey Styles calls Lita a ring rat and a ho in so many words while the crowd says she’s got herpes and calls her a crack whore, earning the show’s TV-MA rating right off the bat. Doring proposes to Lita and then uses a condom as an engagement ring. Who the hell thought any of this was a good idea? Chetti takes the mic mid-match to start dancing, and Lita comes in to dance with him. Maybe Styles had a point. A double splash from Chetti and Nova on Amish Roadkill gets the win.

Jason vs. Jazz – An intergender match between future WWF woman’s champion Jazz and the Buff Bagwell-with-less-hair Jason does not offer me hope of this show improving. The crowd is into the match, but ECW fans were into everything they did, weren’t they? Jazz wins after slamming Jason’s face into a steel chair.

Little Guido vs. Super Crazy – This is a great, fast-paced match between two guys who would go on to wrestle as ethnic stereotypes in WWE. I guess Guido already is an ethnic stereotype. Super Crazy is a lot of fun with all the lucha flips. Crazy bends Guido in half with a Tiger power bomb and sits on Guido’s legs for the win.

Dayton Street Fight Falls Count Anywhere ECW Tag Team Championship Match: The Dudleys (c) vs. Spike Dudley and Balls Mahoney – The promo Bubba Ray cut on the people of Dayton, Ohio before the match was brutal. It really got the weirdo marks in the front row going. And I’m not gonna lie, I think Bubba may have had a point with some of the things he said. Yeah, it was brutal, and would definitely never fly anywhere today, but truth is truth. Some of these ECW fans look like they never made it out of the shallow end of the gene pool.

The match, on the other hand, is just violence porn as these four guys beat the living hell out of each other all over the arena. Tables, chairs, fans’ drinks, it doesn’t matter, it got used in the match as a weapon. With all the violence and potential felonious intent going on in the match, a small package ends it as Spike and Balls upset the most dominant tag team in ECW history. But then, after the match… more violence, as Bubba and D-Von keep beating on the new champs as retribution, including lighting tables on fire and power bombing Spike through a table. Bubba tried to toss Balls through one, but instead dropped him on his head.

The master tape, by the way, is kind of crappy and the tracking seems to be off. It’s a little distracting, which I welcome, because the violence here is just way too much. I guess I knew what I was getting into, but man, it’s just so over the top it’s ridiculous.

An injured Tommy Dreamer comes out next to verbally fellate the ECW crowd and promote the upcoming TV show on TNN. And Tommy starts to cry because Tommy gets emotionally about his hyperviolent wrestling. As the tears flow down his face, Steve Corino, Rhyno and a wheelchair-bound Jack Victory walk out. Corino tears Dreamer down for needing back surgery and not being able to wrestle. Any fan of old-school ECW who tries to rip WWE for their love of talking segments should shut the hell up. Corino is a good talker, but God damn his voice is obnoxious. This whole segment leads to Corino getting beat up by Dreamer and Francine pinning Corino after a spinning DDT. But never mess with a man who has Tajiri and Rhyno at ringside with him. The beatdown leads to the world champ coming out and setting up our title match for the evening.

ECW World Heavyweight Championship Match: Taz (c) vs, Yoshihiro Tajiri – Both of these guys would eventually end up in WWE. Taz would get another z on his name, Tajiri would lose his first name and neither guy would be taken as seriously as Paul Heyman took them in ECW. It’s amazing how Taz’s presentation in ECW makes him a believable bad ass. Probably helps that no one is 6-foot-5, so no one towers over him at under 6-foot. Taz uses the wheelchair to propel Jack Victory into the ropes on the outside and then hits him with the wheelchair for the best spot in the match, then he suplexes Tajiri through a table before he uses something to help choke Tajiri out, all on the ramp. Great match with a mediocre finish because the camera went wide for the last couple of minutes.

Justin Credible and Lance Storm vs. Rob Van Dam and Jerry Lynn – I can’t imagine what Paul Heyman saw in Justin Credible that made him think he should be in a main event spot. He looks like a less threatening and more socially awkward version of Jon Cryer as LEX LUTHOR. Joey Styles succinctly sums up the history between Lynn and RVD, and how these rivals came to be tag team partners here. I don’t really get a sense of why Lynn wanted a tag team partner against the Impact Players, but I suppose wanting to beat up Justin Credible is reason enough.

The early minutes of the match are like a gymnastics floor competition, with flips and reversals and not a whole lot of hard hitting blows. But the violence has to begin eventually. This is ECW, after all. I’m actually amazed both teams stayed in their respective corners as long as they did, but once the match broke down into chaos, it stayed that way. Bulldogs on the entrance ramp, corkscrew legdrops on chairs over guard rails and Sabu randomly shows up to put Justin Credible through a table. The chaos leads to Lynn hitting a cradle piledriver on Lance Storm for the win. But then Sabu, Lynn and RVD all start beating the crap out of each other.

Final Thoughts: I’m glad I stopped watching ECW when I did.