Heroes in Crisis 5 / The Flash Annual 2 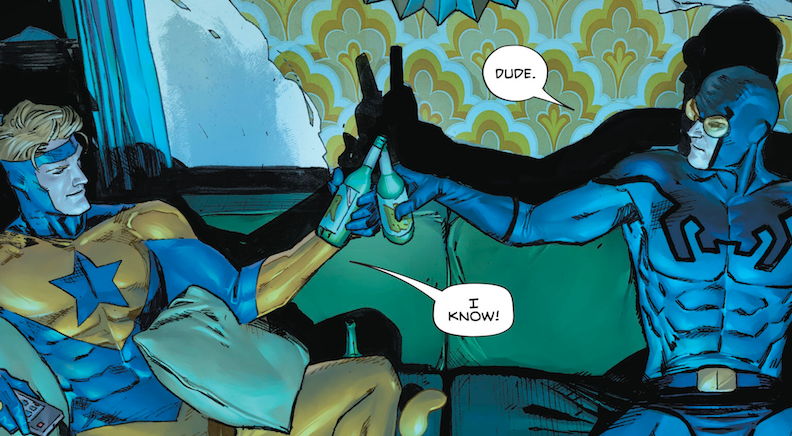 The mystery of what happens in Sanctuary continues as everyone is working their own angle to find out what happened.

Tom King’s exploration of trauma within the superhero community doesn’t seem to be picking up much steam as we hit the halfway point of the nine-issue miniseries. After the LAST ISSUE, I thought business was about to pick up, with Lois Lane releasing an exclusive exposé about Sanctuary, the superhero rehab facility. But as we move on, the latest issue brings us back to the slow build, as King takes his time positioning his chess pieces.

Booster Gold – one of the two suspected Sanctuary killers – is hiding out with his old Bwa-ha-ha pal Blue Beetle, formulating a plan. What they come up with is the exact same plan that Booster originally tried: attack Barry Allen, take any clues he has and figure things out. Why? Because it’s a dumb plan and smart people won’t be expecting it.

Watching King take 20-plus years of Booster Gold’s character growth only to reduce him to the joke he was in the Giffen-DeMatteis JUSTICE LEAGUE is a little frustrating. But he redeems himself a little bit here. But only a little bit. His plan works and he tells Beetle that he can tell something is wrong with Wally West’s body – it’s five days older than it should be.

What could that mean for the mystery of Sanctuary? Who knows… it could just be a red herring. But Booster may be able to use the information to keep Harley Quinn and Batgirl at bay, as the two heroines are on the hunt after they torture his location from Skeets.

Elsewhere, Superman addresses the world about Sanctuary with the… oddest speech ever. If it was meant to be reassuring, if it was meant to be a speech that reached out to the people of the world to give them hope or calm their nerves, it was a dismal failure. Superman is clearly not dealing with what happened well, and it resulted in a very awkward speech. Considering Lois was looking over his shoulder as he wrote it, I would think she would not be happy with that.

The promise of more action continues, at the very least, for the next issue, and the mystery of whether or not something strange is going on with Wally’s death will be at the forefront of the the upcoming Flash-Batman crossover, which kicks off next week.

The situation with Wally was also a bit part of THE FLASH ANNUAL, which also came out this week, as Barry entered the Speed Force to find his former sidekick. Instead, he finds Godspeed, the former Central City cop who got speed powers at the start of the Rebirth era and became a villain. Godspeed goes around using a gauntlet getting samples of the speed from Barry, the Flash of China, Kid Flash Wallace West and Meena for an unseen Speed Force boss. Godspeed also tells Barry he’s sorry for Barry’s loss, which further confuses the issue of what happened to Wally.

Godspeed handles all those speedsters handily, but then has trouble when he runs into Impulse, who is going around Central City looking for all of his former speedster allies, unsuccessfully. Most importantly, he’s looking for Wally, because they were trapped in the Speed Force together after Flashpoint, and when Wally left it left Bart all alone. After the brief encounter with Godspeed, he decides to go and find his former pals in YOUNG JUSTICE.

The mystery of how Bart Allen is back is kind of solved, I guess, but we have a lot more mysteries in the offing. How will Bendis’ Young Justice play into it? Or the Batman-Flash crossover? There’s a lot of moving pieces to follow here.