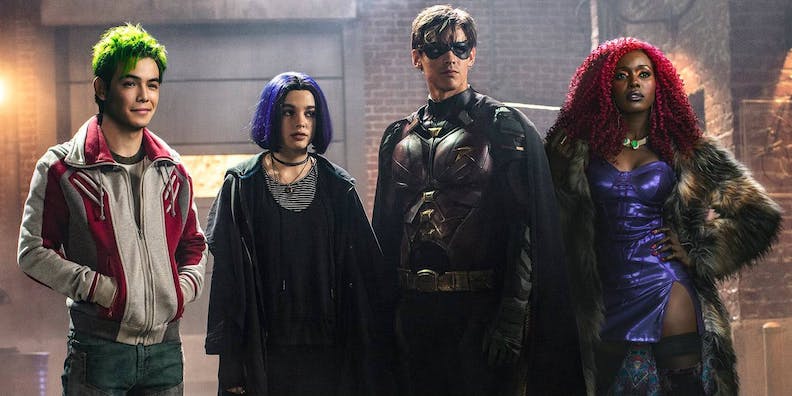 The final episode of the show’s first season debuted on the DC UNIVERSE app Friday, and boy am I glad that’s over.

Last year, DC Comics introduced the concept of the DARK MULTIVERSE, which seemed to be a home for Batman’s deepest, darkest fears. It was populated by characters dreamed up by Bruce Wayne’s demented subconscious – various evil versions of himself in worlds that he terrorized before they escaped to his Earth.

These Titans would fit right in on any number of Dark Multiverse worlds. After all, a Dick Grayson who grew up to be a complete asshole because Batman was an actual sociopath would have to be a nightmare to the Bruce Wayne to whom we’ve grown accustomed.

That seems to be the crux of the show’s first season. Grayson, the first Robin, claims he wants out from the cruel thumb of his mentor, so he could find a way to live a normal life. But the darkness that Batman instilled within him is harder to shake than Dick expects. His search for freedom leads him to Rachel Roth, a teen tormented by literal demons, and Kori Anders, a mysterious woman searching for information about her past. As he gains new ties to people, Grayson keeps trying to run away, because he fears being drawn back into his mentor’s darkness.

I’m almost positive that in the 11 episodes of TITANS first season, Dick Grayson killed more people than in the nearly-80 years since his creation combined. He also said “fuck” an uncomfortable number of times.

There’s nothing at all likable about this Dick Grayson. While his comic book counterpart has spent decades as the one hero everyone likes – the heart of the DC Comics universe – this Robin is something else entirely. The problem is there was little done that made anyone care about him. Most of the standout scenes or even episodes of TITANS‘ first season had nothing to do with Grayson. Maybe that’s on actor Brenton Thwaites, but I think he could be a great Robin/Nightwing if given the right material.

Unfortunately, the quality of the writing and production on TITANS was sometimes at bad cable TV levels and others dropped to a fan film made by people who didn’t understand why Batman and Robin didn’t act more like THE PUNISHER.

The season led up to the final episode, where Grayson accepted the darkness that he had been trying to put beside him. Rachel’s father – the demon Trigon – puts Grayson in a dream sequence where he has the opportunity to overcome the darkness or give in to it. He chooses the worst possible option (not a surprise after the previous 10 episodes) by killing Batman, forsaking the life he had built for himself in his fantasy.

A good chunk of the violence – and pretty much all of the swearing – felt unnecessary, as if it was a 14-year-old’s imagination of what a mature story should be.

While I thought the first season on the whole was disappointing, there were definitely some bright spots that showed some potential for a second season – though I am also concerned about that (more on that later). Many of the highlights came from the guest appearances scattered throughout the season.

The best of the bunch is the DOOM PATROL, which got their focus in the season’s fourth episode. The team of misfits brought together by the eccentric Dr. Niles Caulder all had traumatic events that led to their being part of the Doom Patrol, though the episode was probably the most light-hearted of the whole season.

With their own show debuting on the DC UNIVERSE app in February, it was pretty important for the Doom Patrol to be a hit, and they did a much better job of making Robotman, Negative Man and Elasti-Girl likable than they did for any of the main stars of TITANS.

I only have a passing familiarity with the heroes Hawk and Dove, but their characters on TITANS – Hank Hall and Dawn Granger – were so beautifully crafted. Hank and Dawn are both trying to move past their grief from losing loved ones. Dawn was trying to get over the death of her mother. For Hank, it was his brother Don, who was the original Dove. While Hank was portrayed as a jealous boyfriend at first – because Dawn used to date Grayson – their spotlight episode towards the end of the season had me completely invested in their story.

The final bright spot in the season was Conor Leslie, who took on the role of Donna Troy, the former Wonder Girl. Troy served as a moderating influence on Grayson, not just in the back half of the season where she appeared, but it was shown in her episodes that their friendship kept Robin on an even keel as he was growing up with such a bad role model.

Hopefully, there is more room for these heroes when the second season comes around. Unfortunately, the tease at the end of the season finale gives me great pause, and it looks like we’re going to need a lot more brightness to counter the dark.

As the finale came to a close, the stinger cut to CADMUS Labs in Metropolis, a research facility that made its name dealing with cloning technologies and other genetic manipulations. In the lab, a figure broke out of a test tube and began to take out researches, finally releasing a dog that bore a striking resemblance to Krypto.

Kon-El/Connor Kent/Superboy became one of my favorite characters from the DEATH AND RETURN OF SUPERMAN story, through his membership on Peter David’s YOUNG JUSTICE and Geoff Johns’ run on TEEN TITANS. Having him appear in the second season of TITANS means I’m going to be watching, whenever it debuts. I just hope I don’t end up regretting the decision.