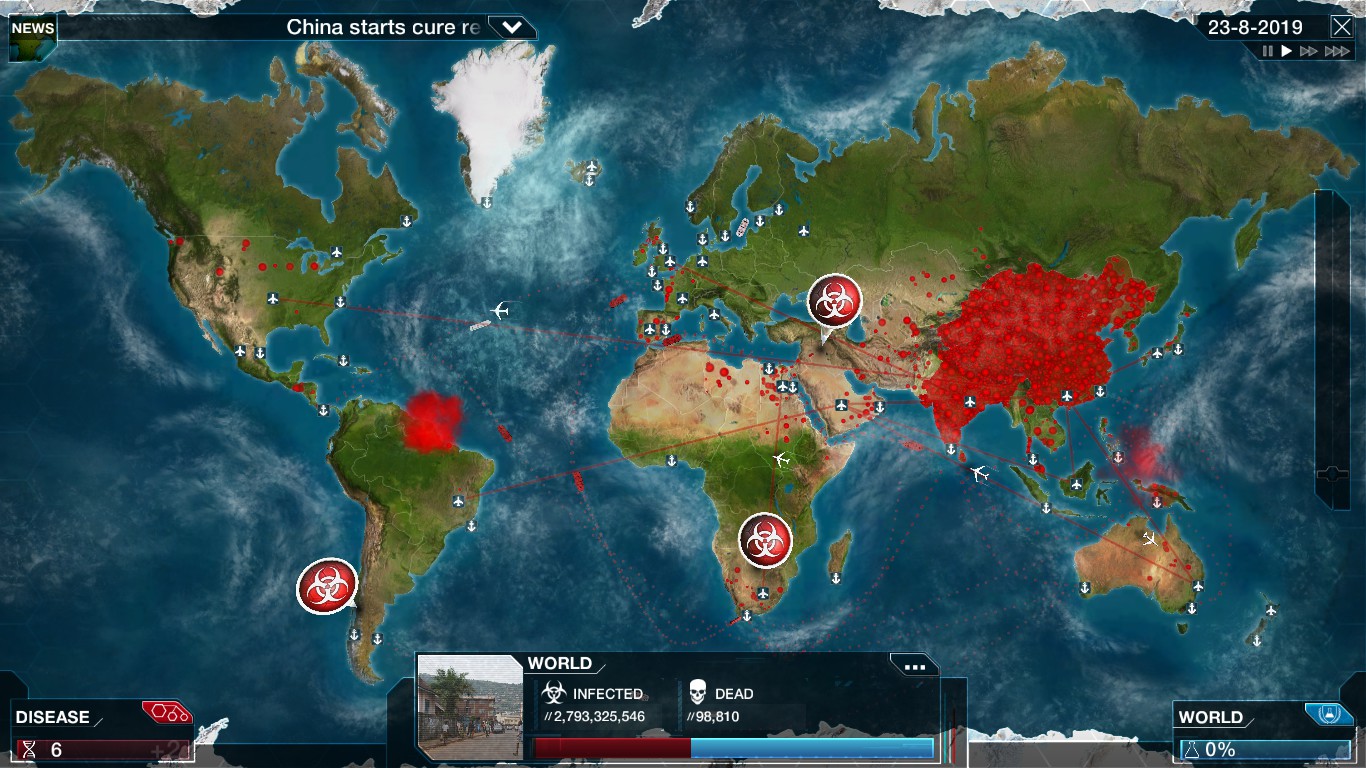 Bubonic Plague. Spanish Flu. Ebola. AIDS. Humanity has been beset by terrible and deadly maladies for pretty much the entirety of our existence, which leads us to one absolute certainty as a species: that it would REALLY suck to die from a disease like that. Well, Ndemic Creations saw fit to tap into that latent fear, giving you control of your very own epidemic, with 2016’s Plague Inc: Evolved.

Plague Inc: Evolved puts you in the lab, releasing and, well, evolving a disease, with the ultimate goal of mutating, spreading, and enhancing your superbug to the point of infecting and eventually killing literally every human on the planet. To begin, you select a type of organism, from basic bacteria and viruses to less realistic options like the zombie-creating Necroa Virus and the Bio-Weapon, give it some extra attributes (unlockable by beating different scenarios on the Normal difficulty) like a greater tendency to spread in humid areas, and select a ground zero for your illness to begin its death march.

Now, your newly minted contamination isn’t going to just crop up and begin leaving a swath of corpses in its path. You’ll have to upgrade it, either through random mutations, where your organism develops a new symptom all on its own, or by using DNA points earned when your disease begins to spread amongst a community or across international borders. Those DNA points can be spent on different improvements to your bug, like transmission methods, allowing it to be spread through saliva or carried by birds and insects, symptoms, which increase in intensity from mere coughing and sneezing to coma and complete immune shutdown, and abilities like becoming more resistant to pharmaceuticals or harder to develop a cure for.

And make no mistake, humanity is not going to just roll over and die for your microscopic Grim Reaper. While your bug will fly under the radar for a while, once it begins to beef up and starts claiming kills across borders, the scientific community as well as governments across the globe will begin to take notice, and more importantly, take action, to stem the tide: countries will begin to shut down entry points by air and sea, eventually closing land crossings, and instituting curfews and other drastic measures to limit any potential exposure. Scientists, on the other hand, will join together and eventually begin to focus worldwide efforts into curing your creation.

Seeing as your goal is to eliminate all of humanity, not just most of it, this effectively means it behooves you to try not to unleash the more deadly and horrific symptoms of your disease until you’ve spread it around sufficiently and have developed some ability to make finding a cure more difficult. Y’see, not only do you have to worry about the march of science, you also have to deal with the simple problem of killing off your carriers before they can infect others, and with the exception of the Necroa Virus, if all your carriers die off before the world is completely infected, you lose. Of course, this also means you’ll have more than a couple of games get derailed because an isolated area like Greenland or the Caribbean decided to shut down their ports (the only method of getting infected persons to those areas) at the drop of a hat, locking you out of a victory even if the rest of the world is keeling over in droves.

While that can be frustrating, it is also a perverse positive for Plague Inc: Evolved, as it demonstrates one of the game’s most impressive features, its realistic portrayal of patterns of a disease spreading and the factors that go into it, so much so that the Centers for Disease Control and other professional epidemiologists have praised the game for providing a fairly accurate simulation of the mechanics of a global pandemic. This doesn’t mean that the game is brutally difficult (although one of the difficulty levels is indeed called Brutal), but more that some level of critical thinking is required.

For example, where you start your plague is a pretty important question; you could plop it down in the U.S. or western Europe first, because so many people have access to rapid international travel and can take their illnesses onboard planes or ships quickly, but on the other hand, those regions have excellent medical infrastructure which can stymie your attempts to spread it amongst the populace undetected. On the flip side of the coin, an impoverished area like central and southern Africa would seem like a safer place to begin working, but the rough, dry climates and the lack of population density mean you’ll be very slow to actually get your sickness spreading at an appreciable rate. Real-life events also come into play here as well; as the game takes place in 2016, an Olympic year, it’s also worth exploring the idea of getting your bug to Brazil in the hopes that the Rio games can serve as a hub from which infected persons will carry the illness to every corner of the globe, at the risk of increasing global awareness too quickly.

I’m also happy to note that there’s a substantial amount of replay value here. Each organism operates somewhat differently than the other, so you’ll have to adjust your approach for each one; bacteria spreads in a very basic manner through simple contamination, whereas the Neurax Worm can only be spread by people, and forces you to spend DNA points on modifying human behavior to make them pass the disease along instead of hoping on water or airborne transmission. Aside from the standard game scenarios and difficulty levels, there’s also a bevy of downloadable scenarios and challenges, along with a bumper crop of achievements for the true completionist, several of which involve discovering combinations of symptoms such as projectile vomiting or uncontrollable diarrhea. Also, if you’re intrigued by the concept here, but don’t feel you’d have time to really sit down at the ol’ desktop and dish out Biblical-level punishment to mankind, there’s also a mobile version available, which Plague Inc: Evolved‘s gameplay lends itself well to, being largely a point-and-click (or point-and-tap, if you’re going the mobile route) affair.

Altogether, Plague Inc: Evolved is a very welcome addition to the Big Steaming Pile. The unique concept coupled with a surprising level of complexity, all while grounded deeply in reality makes for an enjoyable experience, the replay value is quite strong, and the game engine itself is very intuitive and streamlined, not to mention the mobile availability allows prospective mad scientists to take their labs on the go with no real dropoff from the PC version. I definitely recommend it if you’re curious at the concept and want to see a fairly realistic model of how an epidemic spreads at the same time, or if you just want to pretend this is a Resident Evil prequel that explains how the T-Virus got everywhere in the first place. We don’t judge. Just be warned, whether it be bacteria or zombies, humanity WILL fight back.

Is It Worth It? – If you’ve ever wanted to play mad scientist or live out the plotline of the novel Rainbow Six, yes.