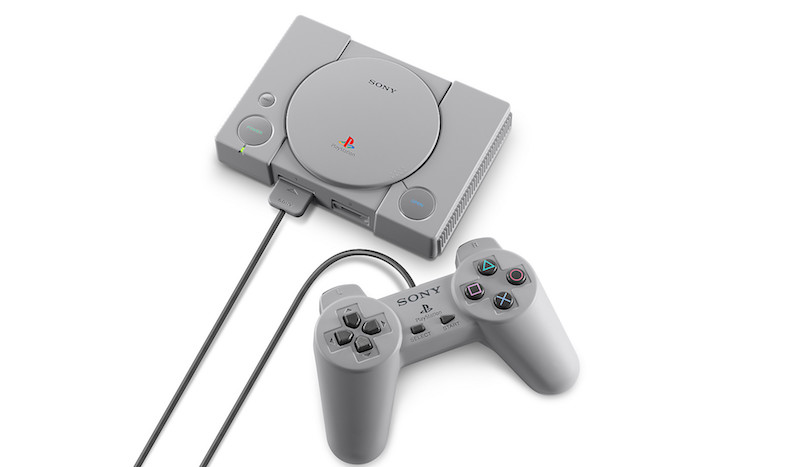 The mini-console revolution will not be contained to just one company!

After the success of the NES Classic and the SNES Classic for Nintendo, Sony has decided to get in on the party with the PLAYSTATION CLASSIC! It’ll be the first of these home console editions to enter the disc era, much like the Sony Playstation ushered in a new dimension of video gaming with a successful system that played off CDs when it was released in the late-1990s.

The PLAYSTATION CLASSIC, which was announced yesterday, will include 20 games from Sony’s inaugural console, though only 5 were announced this week: Final Fantasy VII, Tekken 3, Jumping Flash, Wild Arms and Ridge Racer Type 4.

I’m gonna be honest, I haven’t even heard of a couple of those games. And another iteration of Final Fantasy VII? I get it, Square Enix is remaking the game and it was one of the console’s biggest releases. It was the first Final Fantasy that a lot of people played and it’s a beloved gaming experience, but that game has been released so many times. I have it on my iPad, for crying out loud! Where’s Final Fantasy VIII? I honestly wouldn’t mind playing a remastered version of that again.

Without knowing the other 15 games that will be included on the PLAYSTATION CLASSIC console, I’m not immediately jumping on board getting one the way I wanted an SNES Classic.

What games would get me on board?

BATTLE ARENA TOSHINDEN – the first fighting game of the PSX era I ever played, so it has some nostalgia value for me, even though I can barely remember the plot…

CASTLEVANIA: SYMPHONY OF THE NIGHT – ever system needs a Castlevania, and it’s been way too long since we’ve had a good Castlevania game. Symphony of the Night was a lot of fun and definitely deserves to be included here.

GRAND THEFT AUTO/GRAND THEFT AUTO 2 – It’s fun to see the origins of games that blew up on later consoles. While GTA3 exploded onto the scene with the next generation of games, including its first two incarnations would give a whole new breed of gamer a look at where it came from.

LEGACY OF KAIN: SOUL REAVER – An action-adventure game starring vampire-turned-wraith Raziel, looking for revenge on vampire lord Kain. I spent a lot of time with this game and would love a chance to play it some more.

SILENT HILL – Maybe the most iconic horror game ever, Silent Hill set the standard for the genre. Not including this would be insane.

SOUL EDGE/SOUL BLADE – The precursor to the SOUL CALIBER series, which has a new entry being released later this year. Another fun fighting game that had its origins on the PSX that has stood the test of time.

There are surely dozens of other games that fans would want included in the PLAYSTATION CLASSIC, but including any of those might make me consider getting the retro console.

The PLAYSTATION CLASSIC is set for a December 3 release, with a suggested retail price of $99.99. Pre-orders are available now.

What games would you like to see included? Sound off in the comments section!