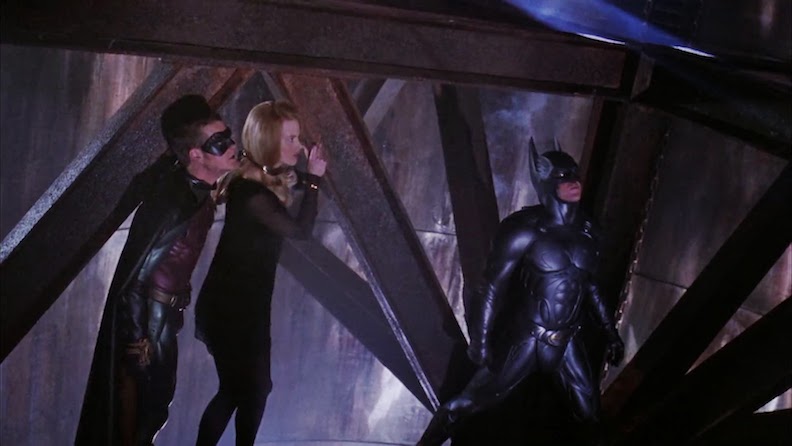 “I’m afraid they’ve taken Dr. Meridian. Master Dick has run away. The cave has been destroyed. And there’s another riddle.”

The not-so-Dark Knight takes on a pair of bumbling goofs pretending to be The Riddler and Two-Face, takes on a new ward and partner and reveals his secret identity to yet another blonde in his quest to protect Gotham City.

Watching this movie again, it felt like someone tried to do an updated version of the ADAM WEST Batman TV show, without understanding what made that show fun and endearing.

Three years after Tim Burton’s BATMAN RETURNS, Gotham City went from a dark, gritty crime-ridden metropolis to a neon-infused crime-ridden disco. And not only did Gotham get a facelift, but it’s most favorite son, Bruce Wayne, also looks completely different as he did in the previous movie!

Val Kilmer takes over in the lead role and does a decent job, though I think he’s a better Batman than he is Bruce Wayne. Watching him try and be a billionaire playboy just seemed out of place. He seemed much more comfortable in the cape and cowl, probably because it was easier to hide the cringes from the overacting of BASICALLY EVERYONE ELSE IN THE MOVIE.

With Jim Carrey cast as The Riddler, you know you’re going to get some scene chewing. But his criminal cohort, Tommy Lee Jones, goes just as over-the-top as Two-Face, the former Harvey Dent. Two-Face, when done right, can be a great tragic villain. Aaron Eckhardt proved that in THE DARK KNIGHT. The depiction of Harvey Dent’s descent into villain was handled beautifully on BATMAN: THE ANIMATED SERIES. Jeph Loeb and Tim Sale’s THE LONG HALLOWEEN and DARK VICTORY are stories that elevate Two-Face into one of the all-time great Bat-villains.

That’s not the case here. Dent is just a goof playing along with The Riddler’s scheme. He kills the Flying Graysons at the circus and then becomes a lackey.

Even Nicole Kidman, cast here as psychologist Dr. Chase Meridian, goes over-the-top throughout the movie, throwing sexual innuendo at Batman, trying to get into his rubber suit.

And then there’s Chris O’Donnell. The future star of NCIS LOS ANGELES joins the franchise here as Dick Grayson, who watches his family of trapeze artists die as Two-Face shoots up the circus. The guy who is clearly over 18 is brought to Wayne Manor, which Grayson agrees to so he can avoid dealing with social services.

Why would an adult have to deal with social services? I feel like when they decided to make Dick Grayson older, they didn’t bother to think through how that causes some problems to the mythos. Of course, I may be overthinking the whole thing and should just get distracted by all the neon and the innuendo and Jim Carrey being Jim Carrey.

At the very least, BATMAN FOREVER had a couple of awesome songs on its soundtrack. They didn’t appear in the movie at all, just in the movie’s closing credits, but U2’s “Hold Me, Thrill Me, Kiss Me, Kill Me” is a great way to close out the flick, as is Seal’s “Kiss From A Rose.” They’re almost wasted on this film, but much like the movie, both songs are very 1990s, so I suppose we can give it a pass.