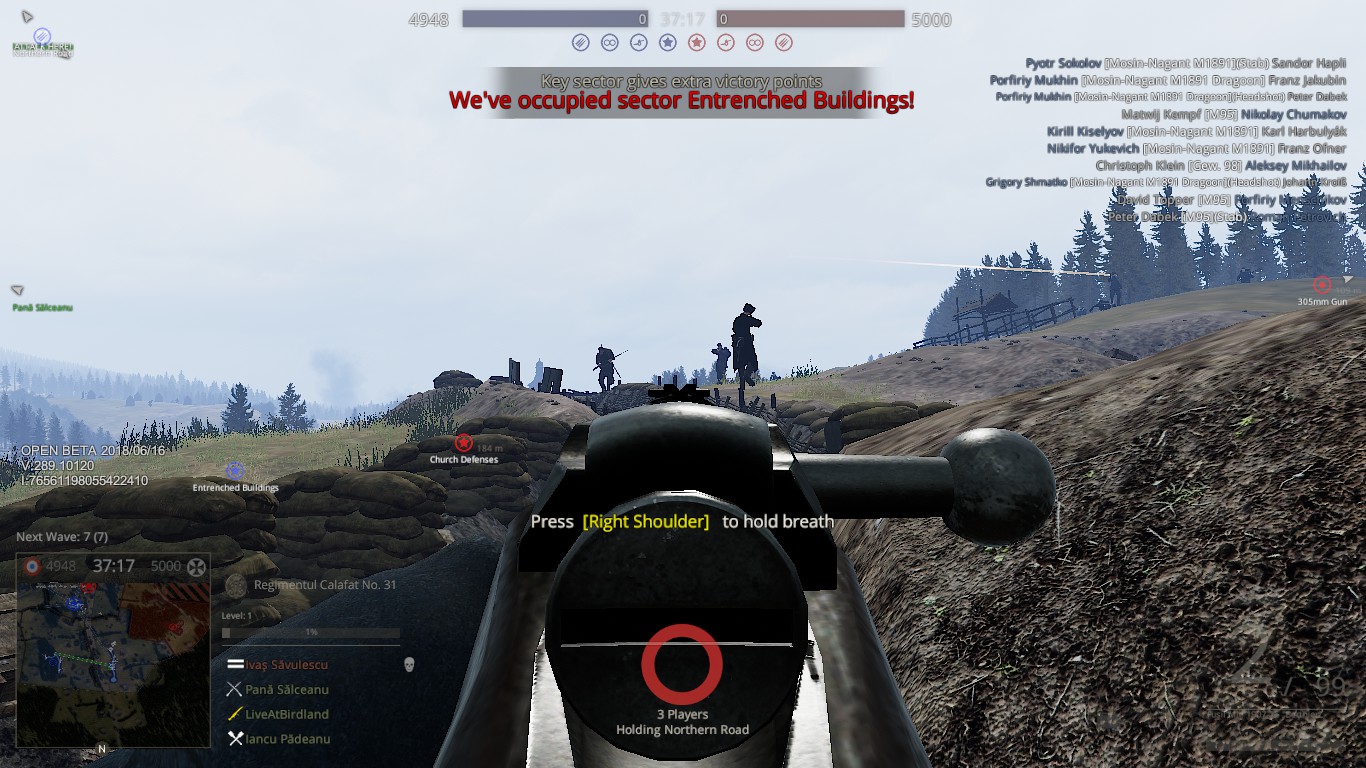 The Pile goes back to the First World War!

One of the first games we covered here at the Pile was VERDUN, the FPS title that took us to the Western Front during the First World War. We thought quite highly of it, and praised it as “the thinking man’s FPS” for its emphasis on teamwork and coordination, as well as its painstaking attention to historical detail. Apparently, we weren’t alone in enjoying it, as Blackmill Games decided that the gaming world would be interested in going back over the top, providing us with today’s piece of the Big Steaming Pile, Tannenberg: 1914-1918, released in 2017.

(Author’s Note: This game is under Early Access, and as such, some features may be added, removed, or modified as development progresses.)

Tannenberg takes us to the Eastern Front of World War I, the lesser known theater of the war, but certainly no less bloody, as Russian troops engaged in massive battles against their German and Austrian foes. However, unlike the turgid trench warfare that unfolded in the fields of Flanders and northeastern France, the war in the east was marked by mobility, as both sides sought victory through maneuver than through sheer attrition. This difference in doctrine is reflected in the gameplay of Tannenberg as well, as the main Frontlines mode of Verdun is replaced by Maneuver mode, which plays very similarly to point-capture modes in most modern FPS games; you and your teammates attempt to capture different strategic points on the map and hold off enemy attackers, and unlike Frontlines, you are not terribly restricted in what site you wish to capture, nor are you required to go through a mandatory defensive phase after taking a position. In this sense, Tannenberg is certainly a great deal more free-flowing than its predecessor, and more akin to a standard FPS.

The other big change that makes Tannenberg feel more like a contemporary shooter is the scale. Verdun featured 16 vs. 16 battles, and Tannenberg doubles that, delivering 32 vs. 32 combat over considerably larger maps. Now, you may be wondering how a hyper-realistic WWI shooter would have enough fans to consistently pack 64-player maps. Well, in a very welcome addition, CPU bots fill any empty spots on the rosters, guaranteeing that you’ll always be at max capacity, and that teams won’t be lopsided (which happened fairly frequently in Verdun‘s early days). As you might expect, the bots are not the most creative opponents, and a seasoned player can shred through them for some impressive kill/death ratios, but on the whole, they do provide a fair level of challenge, and newcomers to the Eastern Front can cut their teeth against them to get a feel for the mechanics of the game and the nuances of the maps without having to deal with the sheer frustration of playing against far more experienced humans or getting yelled at for having the temerity to be a new player. Also, the bots ensure that there’s always a game available at all hours, which is great if you’re like me and work weird hours, come home, and would like a taste of some hot bolt-action excitement at three in the morning.

As there were fewer nations fighting in the east then in the west, the number of available factions to play as is a good bit smaller: at the time of this writing, the Entente Powers consist of the standard-issue Russian Frontovniks, the Cossacks, and the Romanians, while a Central Powers sympathizer can select from the German Infanterie and the Austrian K.u.K. Trupp, although there is discussion about adding the Bulgarians to bolster the Central Power ranks. This mean that there’s a fresh batch of new weaponry to get familiar with, from the lever-action Winchester 1915 carried by some of the Cossacks, to the relatively quick-firing Austrian Mannlicher M1895 rifle, to the lethally powerful Mosin-Nagant revolver the Russians have in the holster. Much like Verdun, each faction has four different classes, with three available loadouts to choose from (again, though, two of them have to be unlocked by leveling up and there’s no customized loadouts this time, either).

It should be noted, though, that there are some pretty fundamental changes to the way loadouts are designed here. In Verdun, machine-gunners were organic members of squads and could single-handedly shift momentum one way or the other, supporting an offensive or holding off a wave of attackers, racking up HUGE kill totals and experience points in the process, and even as overpowered as machine guns felt sometimes, it was at least fairly faithful to the spirit of the Western Front and the futility of head-on assaults. Here, on the other hand, machine guns are not available as weapons you can carry. The only machine guns in this game are mounted at specific points on the maps, and their odd fields of fire and protective shields that obscure a great deal of the gunner’s vision make them unreliable solutions, at best. Other classes of weaponry, like prototype submachine guns, flamethrowers, shotguns, and sniper rifles are also nowhere to be found as well, but even though that might seem disappointing, it’s a sacrifice made in the name of historical accuracy, as since there wasn’t really any static trench warfare taking place in the east, there wouldn’t be any need for weapons like shotguns and flamethrowers whose purpose was to clear out trenches. What this definitely means, though, is that you’re gonna have to get good when it comes to marksmanship, as what you’re left with are bolt-action rifles and revolvers that take an eternity to reload, and if you’re being rushed by a whole squad of enemy troops, you’d better make your shots count if you want a hope of survival.

As I stated, the maps are considerably larger than in Verdun, which is good, as there are only five: East Prussia, Poland, Galicia, the Carpathians, and Romania. They are plenty enjoyable, but they do lack the iconic qualities of Fort Douaumont or the Somme in the West, not to mention the same sense of claustrophobic brutality. But there’s enough variety in them to make them feel decidedly separate from another. Weather now plays a factor in the matches as well, as fog or snow can reduce visibility, and different capture points yield rewards, like the ability to call in an artillery strike or a recon plane over an area, giving one side a potential chance at really breaking through. These touches do add to the already impressive realism factor here, and I’m happy to report that the developers didn’t slack on their research when it was time for a sequel; the period weapons and uniforms look just as detailed and accurate as they did in Verdun, even for more historically obscure sides like the Romanians.

If you were interested in the concept of a realistic World War I shooter, but you wanted something that had a bit more similarity in gameplay to a modern FPS than Verdun’s close-quarters bloodbath approach, Tannenberg is an excellent effort. The Maneuver mode feels more like a round of a Battlefield than Frontlines mode did, but there’s still enough realism and balance to not make this seem like a slow-motion FPS. The addition of bots provides the opportunity for novices or night owls to get some practice in, and the scrapping of some OP features like machine gunners and flamethrowers makes for a much more level playing field. Much like Verdun, I would definitely recommend Tannenberg if you’re looking for something more credible than Battlefield 1, but I’d also say it has the benefit of being less rigid and unforgiving as Verdun was and is, if that’s what you’re looking for. I’d definitely give it a look if you’re on the hunt for a new first-person shooter experience, but even with a less punishing approach, always remember, stay out of the road if you want to grow old.

Is It Worth It? – If you liked Verdun, certainly. If you were interested in the concept but not the trench warfare gameplay, this would be a better one to go with.