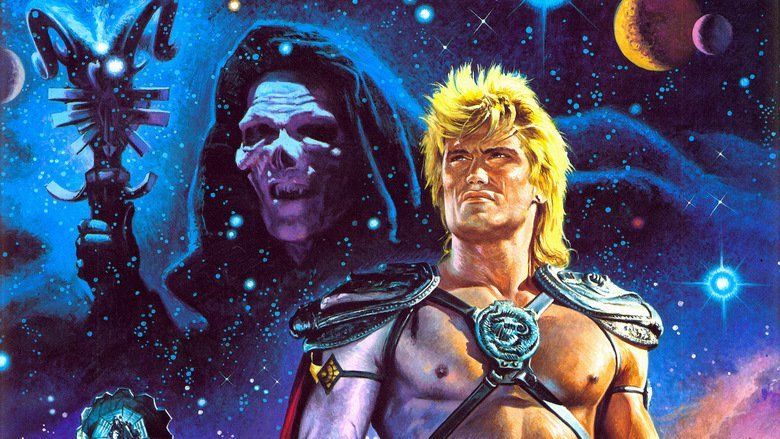 I like how movie releases from 1987 years ago line up nicely with Mondays 30 years later. It gives me a chance to reflect on one of my favorite bad movies from my childhood – Cannon Films’ Masters of the Universe!

Starring Dolph Lundgren as Eternia’s greatest hero, He-Man, the Masters of the Universe movie was one of Cannon’s hopes to turn the studio around, along with Superman IV.

While the wildly successful He-Man and the Masters of the Universe toy line spawned a cartoon that was popular amongst children of the 80s (much like myself), the movie was clearly not based on the cartoon. Instead, it was more closely align with the original concept behind the toy line – He-Man was closer to Conan the Barbarian than Shazam-like in his ability to switch between hero and his alter-ego Prince Adam.

In the movie, Skeletor has finally conquered Eternia, but in He-Man’s struggle to topple the evil dictator, he opens a portal to Earth, and humans get a hold of a cosmic key, which involved Earth in the giant battle. The movie was a casualty of Cannon’s financial difficulties, as the studio shut down production three days before the scheduled end.

While the movie probably isn’t what fans of the cartoon were expecting, the movie isn’t without its charms. Frank Langella as Skeletor was kind of amazing. According to an interview Langella gave, Skeletor was one of his favorite roles to play because of how much his son loved the property. We also have a young Courtney Cox playing the human female lead in surely what must be her proudest moment as an actor.

We never got a more faithful cinematic adaptation of He-Man, but lord knows it’s been adapted all over the place in comics, most recently in a crossover with another 80s property, Thundercats. You can read my review of the first issue of that miniseries RIGHT HERE.

Alright people, remember to yell out “I HAVE THE POWER” at least once today in the open thread.