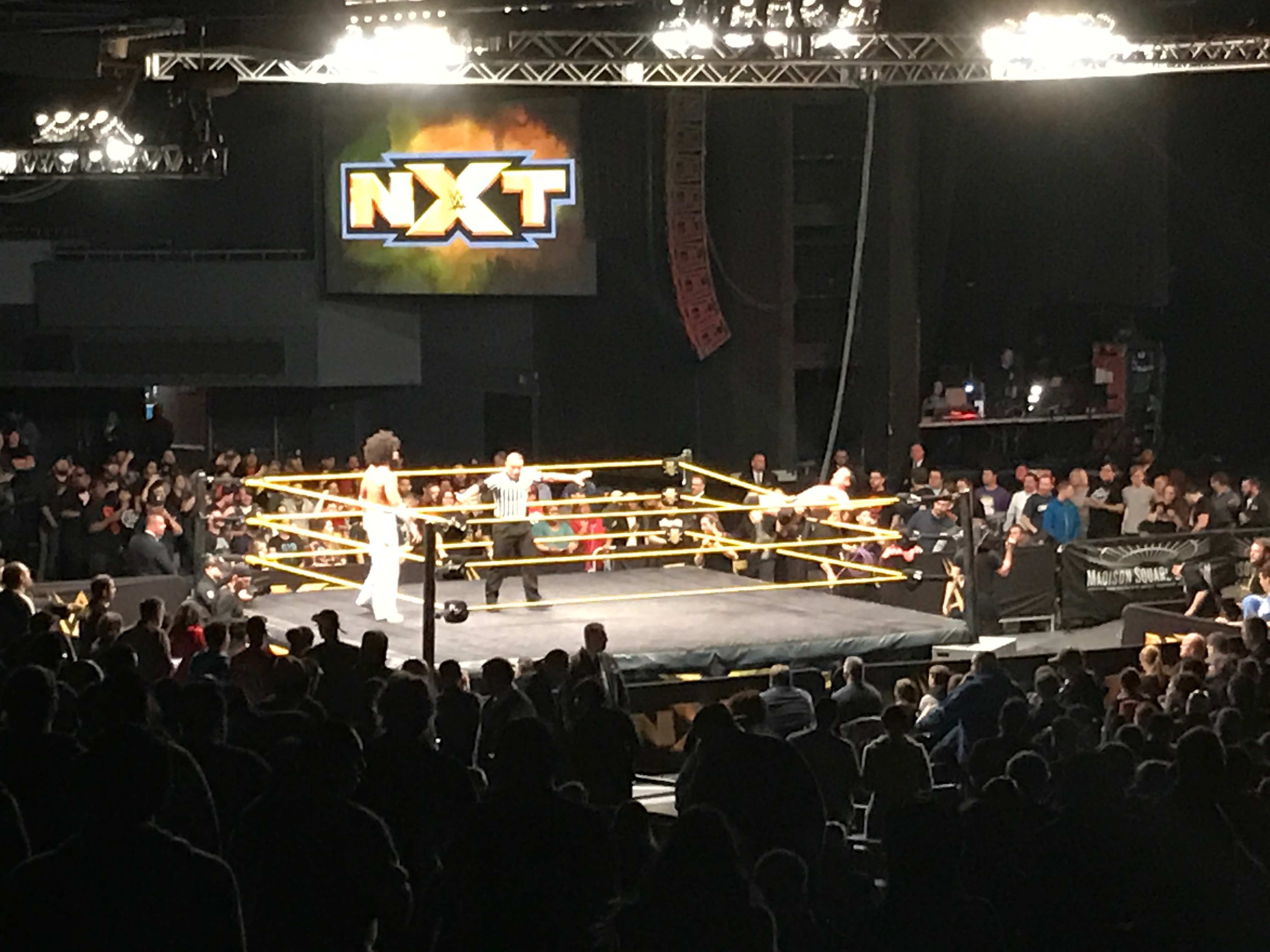 Over the course of 30-plus years as a wrestling fan, I’ve been to a lot of live events, but last night was the first time for me at an NXT show. For the uninitiated, NXT is the “developmental” system for WWE, featuring guys new to the scene and independent veterans who are on board to help train the next generation.

On Wednesday night, NXT came to The Theater at Madison Square Garden, in advance of the big Takeover: Toronto show Saturday night.

The card featured 8 matches (only one championship match) over about two and a half hours. The main event was a six-man tag team match that featured NXT Champion Shinsuke Nakamura teaming with DIY (Tommaso Ciampa and Johnny Gargano) against number one contender Samoa Joe and NXT Tag Team Champions The Revival (Scott Dawson and Dash Wilder).

Nakamura’s entrance is a great part of the NXT Live experience.

The match was a fun way to send the crowd home happy, with Nakamura, Ciampa and Gargano getting the win. DIY and The Revival did a lot of the heavy lifting in the match, which combined two of the title matches from the Takeover event on Saturday. Samoa Joe will challenge Nakamura and The Revival will defend the tag team titles against DIY in a 2-out-of-3 falls match.

The best match of the night featured Bobby Roode taking on Cedric Alexander. Alexander made a splash in WWE with the Cruiserweight Classic tournament on the WWE Network, and had the crowd chanting “PLEASE SIGN CEDRIC” after he was eliminated from the tournament. For reasons I don’t understand, he wasn’t included in the group of cruiserweights that were brought up to Raw two months ago, because Alexander has all the makings of a star.

Pairing him with a veteran like Roode on a house show run is a great way to make sure he’s ready for prime time. When Roode debuted in NXT – after spending way too long at TNA – he became one of the most popular guys on the roster. Fans sing along with his entrance theme on his way in and out of the ring.

Roode won the match, but both he and Alexander looked great.

The show kicked off with dancing sensation No Way Jose taking on newly-signed Indy darling Roderick Strong in a fun match. The opening match is important, needing to get the crowd into the match to parlay the energy throughout the whole show. Jose and Strong were a great choice for the first match, as the entire crowd was chanting from the moment No Way Jose was announced as the first participant.

I really need a better camera…

After the match, Jose danced around the ringside area greeting fans and came upon Shane McMahon, the company’s prodigal son and current “commissioner” of SmackDown Live on Tuesday nights. McMahon was in the front row with his for Mean Street Posse associate Pete Gas. A “SHANE O’MAC” chant from the crowd immediately followed Shane getting on camera with Jose.

The only real misstep on the card was a tag team match midway through the first half of the card, as TM-61 (Nick Miller and Shane Thorne) took on Alexander Wolfe and Sawyer Fulton of new faction SANITY, managed by Eric Young. The crowd did not care one whit about anyone in the match. No reactions during hot tags and the reaction for TM-61’s win was perfunctory at best.

The crowd didn’t wake back up until “The Perfect 10” Tye Dillenger ran out to save TM-61 from a post-match 3-on-2 beatdown, which lead to match between Dillenger and Young.

Overall, the NXT Live event experience was a lot of fun in the small environment of The Theater at MSG. It was probably one of the best experiences I’ve ever had at a live event and I would definitely recommend going to an NXT show if you have the opportunity. It was a great primer for Saturday’s NXT Takeover: Toronto show Saturday night.