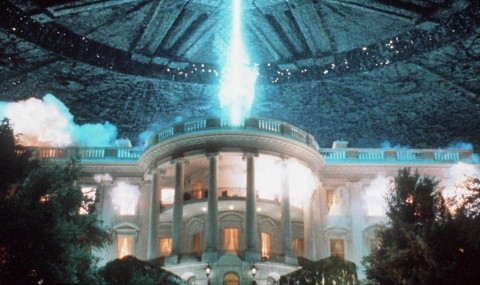 “And should we win the day, the Fourth of July will no longer be known as an American holiday, but as the day the world declared in one voice: ‘We will not go quietly into the night! We will not vanish without a fight! We’re going to live on! We’re going to survive!’ Today we celebrate our Independence Day!” –President Thomas Whitmore

Within my circle of friends, Independence Day was probably the most anticipated movie of 1996. From the moment the teaser was shown during the Super Bowl that year, we were all looking forward to what this film would bring.

The amount of destruction in the teaser alone is tough to top and 25(!) years later, the image of the alien space craft hovering over the White House and unleashing a destructive beam into the home of the President of the United States is iconic imagery. But back in 1996, we were just looking forward to being entertained by a Sci-Fi story on an epic scale.

There’s no high-minded premise. The aliens coming to attack Earth are given no more motivation than coming here to wreak havoc. The people of the world, who watched their civilization torn apart in just about a day, must unify and fight back, or else the human race is lost. When you need to get rid of an attacking alien armada, the world must rely on its most trusted heroes.

Jeff Goldblum and Will Smith. Of course. Who else would you get?

While Goldblum was an established movie star, Independence Day was the first big budget action film for Smith, and it turned him from a sitcom star to one of the biggest movie draws on the planet. And all he had to do was punch an alien in the face and smoke a cigar in an alien craft.

Now, the plan hatched to defeat the aliens may not be the greatest in movie history, but it’s certainly memorable for all the wrong reasons. While Apple operating systems may be used in many households today, interfacing with alien technology using a MacOS from 1996 seemed ludicrous even back then. Hell, I could barely find any computer games to play on a Mac computer back in 1996, but yeah, it should totally be able to take down an alien civilization. I think my friend Craig is still annoyed at that scene all these years later.

Of course, no discussion of Independence Day is complete without the speech from President Whitmore, played perfectly by Bill Pullman.

That speech still gives me chills, damn it.