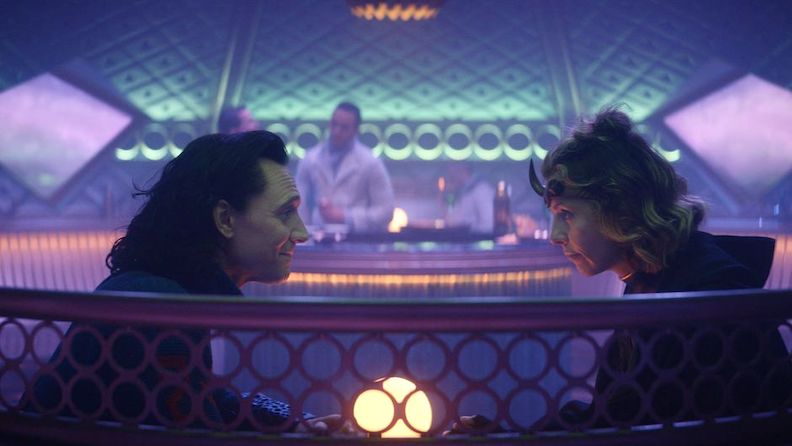 We ended LAST WEEK, with the God of Mischief following the variant Lady Loki through a TVA portal to parts unknown!

We pick up this week with a slight flashback, Lady Loki brainwashing the TVA agent she kidnapped to give up information on how to get to the Time-Keepers. We also see Lady Loki has opened a portal to the TVA itself, with her plan to scatter the timeline being a distraction to leave the headquarters with its guard down.

Loki, having followed her through, grabs his favored daggers and follows Lady Loki to the elevator that allegedly leads to the timekeepers. Lady Loki has easily dispatched what was left of the TVA defenses. This confrontation is short lived, as Judge Renslayer shows up, threatening to prune/kill both Lokis leading MCU Loki to use the TemPad (the tablet that controls time jumps) to portal them away.

We jump to the moon Lamentis in the year 2077. This is another apocalypse event, giving the Lokis cover from the TVA. But Lady Loki quickly points out this may be the worst place they could have jumped as the planet above the moon was hurtling through space on a collision course with the moon, wiping out everyone on it. To complicate matters, the TemPad’s battery was dead and needed a charge. Even in a timeless dimension, batteries suck!

We find out great news here as well: Lady Loki prefers going by the name Sylvie. Welcome Sylvie! Loki and Sylvie have a delicate balance here, Loki hides the TemPad to keep Sylvie from killing him. Sylvie tries to mind control Loki but his “mind is too strong” to be mind controlled. They decide to travel to the moon’s train station as there is a full on evacuation mission also going on for the moon’s inhabitants, hoping to be able to charge the TemPad there.

Once on the train, we get banter between Loki and Sylvie, sharing their backstories, comparing how they learned their magic. Sylvie begrudgingly confirms she is a Loki but uses Sylvie as an alias. Yet there’s enough mystery in her story presentation that this may come back later as a plot point.

Loki confirms he’s bisexual in somewhat of a throwaway line that seems to be getting most of the Twitterverse focus as both characters mention how love has been fleeting and they’ve yet to find someone to fully connect with.

Their plan goes sideways when a drunk Loki gets them both thrown off the train, forcing them to walk the rest of the way to the extraction point on foot. While walking, Sylvie changes what we know of the TVA, pointing out all the agents and anyone in the TVA world are actually variants brainwashed by the TVA and pulled out of their respective timelines to serve. Loki realizes this could be a game changer as this implies Mobius and company are living a lie at best or in on the scheme at worst. Sylvie also points out the TVA has been hunting her as long as she can remember. She adds some interesting bits too about not remembering much of her adoptive family, pointing to a drastically different upbringing compared to Loki’s time on Asgard.

The episode ends with this plan going awry as well, when the evacuation ship is blown up by planet debri, stranding Loki and Sylvie on the doomed moon.

I don’t have to call her Lady Loki any more! Giving her the Sylvie moniker makes these a lot less confusing to write and hopefully to read! Whether they go full on Enchantress with her or combine that character with Lady Loki from the comics still seems to be up in the air, but for now, long live Sylvie!

Also a great part of this episode was the chemistry between Loki and Sylvie. This episode proved heavy on exposition, much like last week’s, but it kept moving forward with a really nice set piece involving the crashing planet. Credit due to Tom Hiddleston, but two shots involving Loki and almost anyone during his run in the MCU often prove great to watch and his work here with Sophia Di Martino’s Sylvie is no exception. Loki shows a vulnerability talking of learning magic from Frigga that has helped make the character a fan favorite.

Let’s double back to the set piece as well! Now we can see why last week felt like such a bottle episode in comparison as heavy use of well done cg brought the dying moon Lamentis to life.

Slim pickings this week as the episode was really well done and flew by. If nits need to be picked, a look in at Mobius, missing this week, may have been welcomed. Hypothetically, a couple of cutaways to him bouncing through various apocalyptic events looking for Loki and Sylvie could have provided some fun comic relief.

I enjoyed it, we now have a better understanding of Sylvie and for the last 3 episodes it does look like the tides have turned and the TVA is setting up as the big bad!