The Falcon and the Winter Soldier Episode 4 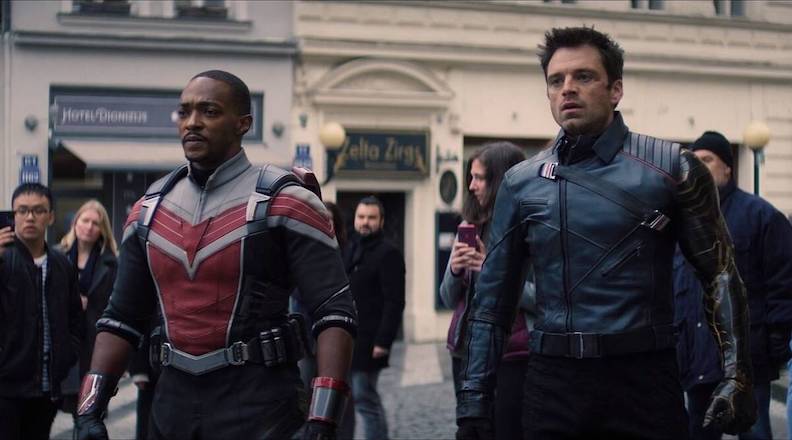 And we’re firmly off the fence with New Cap! By episode’s end, there’s no denying this guy’s no Steve Rogers. Looking over my notes, I had a half dozen variations of “what a prick,” even before the shocking conclusion.

But let’s start at the beginning! When we left Sam and Bucky IN EPISODE 3, they were following a lead on Karli Morgenthau, which led Sam, Bucky, and Bad Ass Dancin’ Baron Zemo to Latvia. Here Karli has traveled to mourn the loss of a mother figure to her who recently passed away. Last episode ended with Black Panther bodyguard Ayo confronting Bucky.

We pick up with the confrontation. Ayo feels betrayed by Bucky for all the Wakandans did for him, freeing him from the Hydra brainwashing. Bucky agrees but pleads that Zemo is a means to an end, speaking Wakandan to Ayo, who grants Bucky eight more hours before they take Zemo.

After telling this to Zemo, they continue to track Karli. People know Falcon’s identity but refuse to help him, seeing him as a symbol of the power structure that has screwed the little people post-blip. Zemo changes gears from suave here to creepy, offering candy to kids for the location of the funeral Karli will be attending. He keeps this information to himself, realizing he needs leverage to avoid Bucky just turning the Baron over to the Wakandans.

We get several glimpses of New Cap during the early parts of the episode, as he’s slowly losing his cool, showing nervous ticks and the self doubt and paranoia that would have surely had Dr. Erskine send him packing if he had volunteered for the serum in THE FIRST AVENGER.

Sam puts in a call to Sharon Carter, to see if she can offer any surveillance. She quickly offers up that she may have satellites at her disposal. Which, honestly, makes me nervous on some of the Sharon speculation from last week! Fingers crossed there’s a positive swerve in place for her arc, but we’ll see!

New Cap and Battlestar show up, threaten to arrest Zemo, and to be let in on the apprehension of Karli. Sam insists he try to talk her down first, which Cap begrudgingly accepts.

Sam and Karli end up having a heart-to-heart after the memorial service, and just when it seems he’s making headway, New Cap busts in to arrest Karli. What a prick! This causes a brief fight where Karli gets away. But not before Zemo is able to destroy all of the remaining super serum vials except for one. The final vial? Pocketed by New Cap in a bit of rather heavy-handed Chekhov’s Gun camera work.

After the scuffle, Sam, Cap, Bucky, Battlestar, and Zemo are all in Zemo’s safehouse when Ayo returns with more Dora Milaje – Black Panther’s bodyguards. Sam tells Cap he probably wants to stand down, but being the prick he is, they end up fighting. Ayo and her warriors quickly defeat Cap. In the skirmish, Zemo was able to escape. In the aftermath, a petulant Cap remarks “they weren’t even supersoldiers!”

During the episode, both Sam and Cap discuss what they would do if they had the super soldier serum. For Sam, while talking to Zemo, the conversation is just hypothetical, but he quickly insists he’d want no part of it.

For Cap though, the conversation is much more real. By this point, when talking it over with Battlestar, Cap already has stolen the last remaining vial. Battlestar says he’d take it with no worries. The serum only highlights what is inside you. If you’re Steve Rogers, your heart will shine through. John Walker takes in that talk, again with rather obvious implications for the dumb decision he’ll soon be making.

The episode ends after Karli sets up a meeting with Sam. She does this by pseudo-threatening Sam’s family. One gripe I do have with this season is they really are trying to overdo the shades of gray here with the Flag Smashers and Karli in particular. I think the story would have been much more compelling if they kept her as truly a Robin Hood of sorts, fighting the good fight. Here, whether she would seriously hurt Sam’s sister or not, the threat is in play. She’s already killed innocents at the end of last week’s episode, and is willing to hurt more.

If that was the story and the focus was her corruption, it would be one thing. But the episode ends with the next evolution of Cap. After a final battle where Karli kills Cap’s sidekick, Battlestar, a now obviously unhinged Cap kills one of Karli’s Flag Smashers. In a bit of brutality not really shown in the MCU before and with what may become an iconic image of the Captain America shield covered in blood.

We get our episode title, “The Whole World is Watching” from this scene as well, as dozens of people in the town center film John Walker killing a defenseless man in cold blood.

They did a nice job building the tension of the episode. There’s a constant feeling of something bad is about to happen, whether that would have been by Zemo’s hands, or Cap’s impending psychotic break. I wish things were a little tighter thematically but this is still a big swing for Disney and the MCU, continuing to showcase what power looks like to those not in power. This isn’t an Avengers where the good guys save the day. But, we have a feel for the little people left in their wake here.

We’re down to two episodes left and the fight for the legacy of Captain America has begun!

Masters of manipulation these Disney people! If you’re thinking like me, I know what you’re excited for! Most people see Cap’s shield covered in blood and they’re worried. Depressed. Crushed. Me? I see a clue! Blood? In such an iconic final shot? Disney might as well spell it out in fireworks over Cinderella’s Castle! By episode 6, we’re going to have noted vampire himself, Blade, officially joining the MCU! Move over Wesley Snipes!