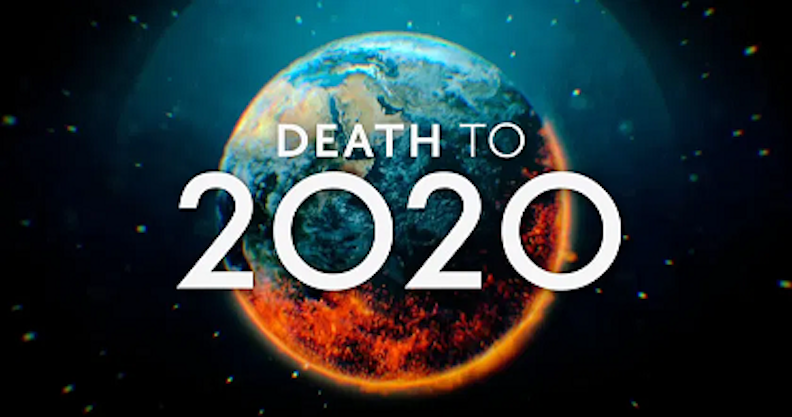 As far as calendar years go, the past 12 months have certainly been… shall we say unspectacular. That may be too kind. Maybe the right term is “terribly craptastic.” Yeah, I like that better.

But much like MYSTERY SCIENCE THEATER taught us so many years ago, some of the worst things can be made enjoyable when you throw enough snark at them. The new Netflix mockumentary, Death to 2020, certainly proves this axiom to be true.

With scant days and hours left in a year that saw the world shut down by a virus, forcing us to do nothing but stay home and tweet incessantly about the 2020 U.S. Presidential election, streaming leader Netflix dropped the hour-long show from Charlie Brooker, the creator of Black Mirror. I wonder if Brooker realized he could have just turned 2020 into an episode? No one would have been the wiser, I’m sure.

Brooker wrote and created the Death to 2020 special and also served as the voice of the documentarian, interviewing various “experts” to discuss the year that was.

The mockumentary goes month-by-month, interspersed with comments from these “experts,” including a newspaper reporter, a historian, a virologist, the CEO of a social media company, a psychologist, a soccer mom, a gig worker, an unofficial Trump spokeswoman, the Queen of England and one of the “five most average people in the world.”

It’s an amazing cross-section of what made 2020 so frustrating to live through, and the actors cast as these “experts” were hilarious. Some highlights:

Eternal badass Samuel L. Jackson played Dash Bracket, a New York City newspaper man who offered some even-handed critiques of the events of 2020, especially the coronavirus and the Trump-Biden election. Bracket succinctly summed up the decision people made to go protest the death of George Floyd in the face of dealing with the coronavirus:

“Don’t get me wrong, I fucking hate the virus. But at least it doesn’t pretend it’s here to help. It doesn’t drive around the neighborhood with ‘Protect and Serve’ painted on its side before it kills you.”

Comedian Tracy Ullman took on the role of “Queen Elizabeth the first, part two,” giving the mockumentary an inside look at Boris Johnson’s fumbling of the virus in England and the royal departure of the Duke and Dutchess of Sussex, Prince Harry and Meghan Markle. It also allowed for some Netflix synergy, as the Queen gave some thoughts on her favorite show:

“Some say The Crown is unrealistic. But it strikes me as a far more faithful depiction of the monarchy than their other regal drama, Tiger King. That man is from no royal line I recognize.”

Hugh Grant takes on the persona of historian (and possible drunkard) Tennyson Foss. Foss is pretty racist and he thinks that Game of Thrones and the Battle of Endor from Return of the Jedi are true historical events. But he does get some things right:

“The history books covering this period will have to be written in crayon. By a dog.”

On the more infuriating side was actress Cristin Milioti, formerly known as “the mother” from How I Met Your Mother, now playing a soccer mom who gets a little too deep into Conservative internet conspiracy theories.

“We’ve seen him do this before. When he crossed a human with a paperclip and made that poor tormented monster that haunted Windows 98.”

Most of the hour-long program had me laughing the whole way through. Mainly because the alternative was to cry about the year we had all just experienced. Death to 2020 is definitely worth a watch if you can bring yourself to relive it all.