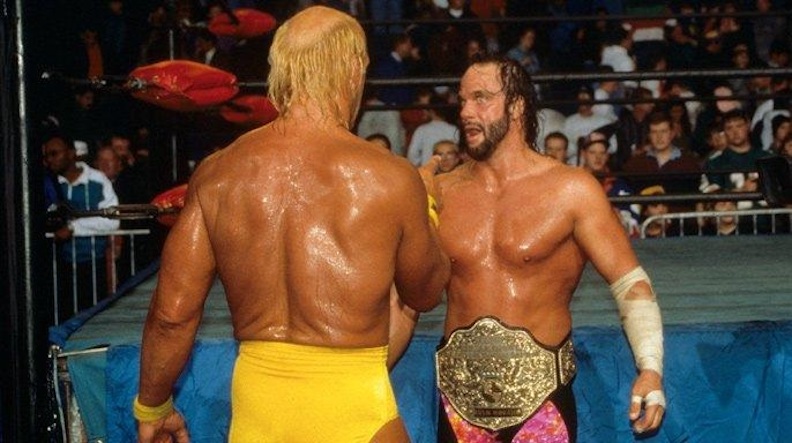 The referee’s decision is final.

The results of a battle royal for the WCW World Championship that took up three rings and involved 60 men came down to those five words. With just three men left in the battle royal – “Macho Man” Randy Savage, One Man Gang and Hulk Hogan – The Giant pulled Hogan under the bottom rope. The referee was tied up watching Savage eliminate Gang, so when he saw Hogan outside the ring, he awarded the match – and the championship – to Savage, the last man standing in the ring. The decision kicked off some obvious controversy when Hogan called shenanigans, since he was never actually eliminated. When the former champion called to see the footage – and Savage agreed – “MEAN” GENE OKERLUND said they could see the footage the next night on Monday Nitro.

The three-ring, 60-man battle royal was fun, but it all falls apart here as WCW tried to out-because WCW themselves with a controversy that was easily fixed. With three rings, there were three announce teams, with three announce tables set up with monitors and headsets connected to the booth. All Hogan or Savage or Okerlund had to do was go to a table, call the truck and show the footage to the overwhelmed referee Randy Anderson.

Speaking of Anderson, how was he the ONLY referee out there? There should have been at least a half dozen guys out there watching the action, any of whom could have told Anderson what actually happened. Even just a half-second of thought makes the whole situation seem even more ridiculous than it was before. But I guess they needed to do something to end the show in a way to get people buzzing about Nitro.

Best Match: Sting defeated Ric Flair – Still reeling from the betrayal that EVERYONE saw coming at HALLOWEEN HAVOC, Sting was looking for revenge against the “Nature Boy.” Well, more revenge, since he had already been in the ring with Flair from a silly fan vote in between the two pay-per-views, and he managed to snag Flair into the Scorpion Deathlock and only released the hold when Lex Luger came down and whispered something in his ear. So, this is his second go-round seeking revenge, which he already kind of got. Why would Flair even take this match at this point? The Stinger and the “Nature Boy” can pull off a good match in their sleep, and they delivered again here, building on their history. Sting once again wins with the Scorpion, but this time he doesn’t need Luger to talk him into letting go.

Worst Match: Taped Fist Match: Big Bubba Rogers defeated “Hacksaw” Jim Duggan – There was never any hope of this being good. It was a lackluster brawl that failed to keep my interest. VK Wallstreet interferes, hands Bubba a chain and Bubba knocks Duggan out for the win.

“Observe This” – World War 3 started off with an interview with Hogan, Sting and Savage, where Hogan got rid of the black garb he’d been wearing and declared that the three of them were friends for life, like they were in an extra-saccharine episode of Saved by the Bell. Hogan also trashed the dirt sheets, tossing a copy of the Wrestling Observer newsletter in a fiery trash can and mocked it for saying Giant was going to win the battle royal and that Savage was injured (even though he clearly was).

50-50 Booking – Savage may have won the WCW Championship in the main event, but he didn’t fare as well against his one-on-one opponent for the evening, Lex Luger. A rematch from Halloween Havoc (another night where both men were in two matches), when Savage got the better of Luger, fortunes were reversed here, with Luger knocking Savage out and locking him an armbar for the win.

That’s all for WW3! It’s time to spend the rest of the day watching The Godfather and having turkey! The 1995 Top 10 will be back in three weeks with the final WWF show of 1995 – In Your House 5! Stay tuned!