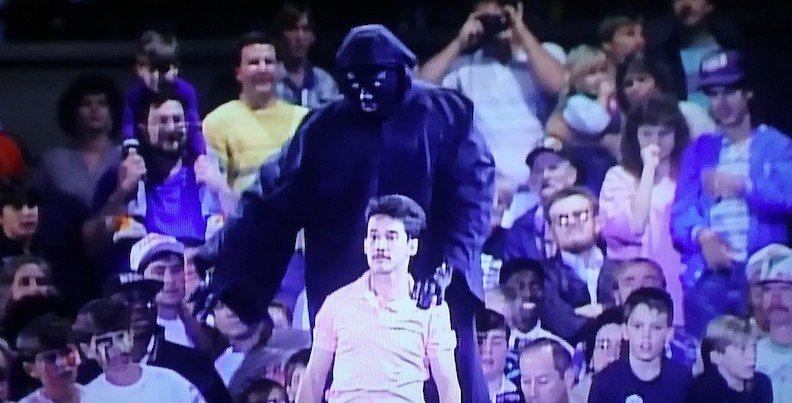 Once again, the NWA World Heavyweight Champion’s weird battle of wits with “a mysterious character from his past” takes center stage at a Clash. With a big title defense coming up at Starrcade, champion Sting needed to confront the Black Scorpion here. But he had already defeated one of the Scorpion’s goons at the previous Clash, to no avail, so a rematch on TV would be pointless with the Starrcade match a month away.

So instead, Paul E. Dangerously set up an opportunity for the Scorpion to show Sting his “black magic” to mess with Sting’s mind some more.

Mostly what it did was make me wonder who thought this could possibly be a good idea.

The Black Scorpion does his little parlor tricks – including twisting a man’s head all the way around, then turning him into a tiger before disappearing completely – as Sting and Paul E. look on dumbfounded. Dangerously’s over-the-top reactions to Scorpion’s mirror tricks makes this “so bad it’s funny,” but just barely. It mostly feels like a waste of TV time as Sting looks like a complete goof for having to be involved in this. Thankfully, it’s all almost over, and again, in the most ridiculous way possible.

Best Match: “Nature Boy” Ric Flair defeated Butch Reed – The team of Doom is one of the highlights of 1990 for me, and Reed getting the main event with Ric Flair – battling over whether the Horsemen would get another shot at the NWA Tag Team Championships during the Starrcade pay-per-view gave the match some stakes and a level of emotion. The longest match on the card had time to tell its story, with Reed’s partner Ron Simmons and Flair’s compatriot Arn Anderson both getting involved. In the end, Simmons knocked out Flair, put Reed on top and left the ring to celebrate, but there was no referee. So Anderson came in, hit Reed with a chair, positioned Flair to get the pin and threw the referee in so his team could get the win. It was pure perfection so the dirtiest players in the game could teach the up-and-comers some lessons.

Tag Team Turmoil: While Doom was trying to fend off a challenge for their World Tag Team Championships from the Horsemen, the United States Tag Team Champions, the Steiner Brothers, continued their feud with the Nasty Boys. Facing off against other opponents at the Clash, the two teams couldn’t help but get involved in the others’ matches. Rick and Scott Steiner caused a DQ in the Nasty’s match with Mark and Chris Youngblood (Wikipedia says the Youngbloods won that match by DQ, but that seems weird considering the Steiners attacked the Nastys); later in the show, Knobbs and Saggs attacked the Steiners after the U.S. Champs defeated jobber team Magnum Force. Normally, this feud would have been blown off at Starrcade, but the Steiners were the number one seeds in the tag tournament set for that show, so we never got a final TV brawl between the two.

Bad Kitty: As a kid, I always liked “Big Cat” Curtis Hughes, especially once he transformed into his Mr. Hughes bodyguard persona. He was introduced to a big television audience here by defeating Brad Armstrong, being hyped as a threat to Lex Luger if Luger managed to regain his United States Championship from Stan Hansen. But that wasn’t the last we saw of Hughes. He also walked onto an interview Tony Schiavone was conducting with Luger, leading Luger to punch him in the face and walk off. Even later, Hughes wandered down to the ring while Sid Vicious was battling the Nightstalker, once again getting punched in the face before Sid put Nightstalker down. He could’ve been somebody, but here he just looked like a loser.

DISCLAIMER* The Top 10 rankings are for discussion purposes only and in no way reflect an official or authoritative list. It is simply my opinion. If you disagree, let me know in the comments. New arrivals to the Top 10 are in bold.

That’s all for Clash of the Champions XIII! We’ll be back in a few days with Survivor Series 1990! Stay tuned!