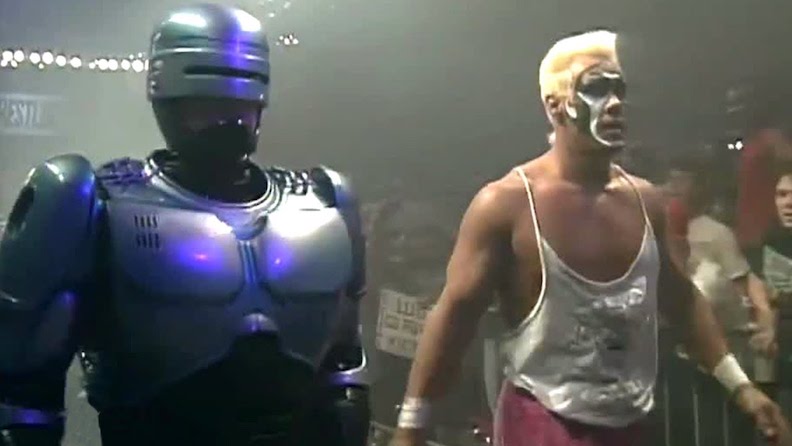 You’ve got the world heavyweight champion defending his title inside the confines of a steel cage. One of the most popular wrestlers in the promotion is quickly making his way back from a serious injury that’s kept him out since February. But what is the major focus of the promotion for this show? A crossover promotion with the Turner home video department to hype the Robocop sequel. Because WCW.

The show was even called “Capital Combat – The Return of Robocop” pretty much throughout the show. You’d think with all the hype for the cybernetic law enforcer, he’d be a major part of the show. But all he did was save the recovering Sting from a pretty contrived attack from the Four Horsemen. They bumrushed the Stinger and locked him in a small cage at ringside, giving Robocop a reason to come down and rip off the door.

Best Match: United States Tag Team Championship Match: The Midnight Express defeated “Flyin” Brian Pillman and Tom Zenk (c) – After a couple of terribly boring matches to start the year, Zenk and Pillman finally go from worst to first in this defence of their U.S. Tag Team Championship. That may have more to do with who they were in the ring with, though. Stan Lane and Bobby Eaton were having a string of great matches, and it continues here, as Jim Cornette’s boys take out the champs and win the titles.

Worst Match: Hair vs. Hair Match: “Precious” Paul Ellering beat Theodore R. Long – Two managers with barely any hair battling in a Hair vs. Hair match makes perfect sense, doesn’t it? This couldn’t even be bothered to approach “so bad it’s good” range and mostly just amounted to a waste of pay-per-view time.

What’s In A Name? – Naming the show “Capital Combat – The Return of Robocop” makes it a bit of a mouthful, but the original announcement for the show had a completely different name. When Jim Ross signed off from WRESTLE WAR 90, he said the next show would be “Armed and Dangerous,” which probably fit having Robocop on the show a little better.

Cage Match Rules – The main event was a steel cage World Championship defense for “Nature Boy” Ric Flair against Lex Luger, a man he had managed to outwit any number of times over the last couple of years. And the “dirtiest player in the game” found another way out here. In a steel cage match, which is meant to keep the participants in and any others out, Flair and the Horsemen found a way to raise the cage during the match so new Horseman Barry Windham could run in and attack Luger. Instead of a double-team (or more) to beat Luger down to give Flair the win, the referee disqualified Flair… in a steel cage match, which is normally considered no-disqualification! In order to make the save, Sting runs down to ringside and brings the debuting 7-foot-7 El Gigante with him. The giant seemed like he had no idea what he was doing, mostly just standing around and making weird faces until the Horsemen ran away.

The 1990 Top 10 will be back next month, with another WCW show – Clash of the Champions XI! Stay tuned!