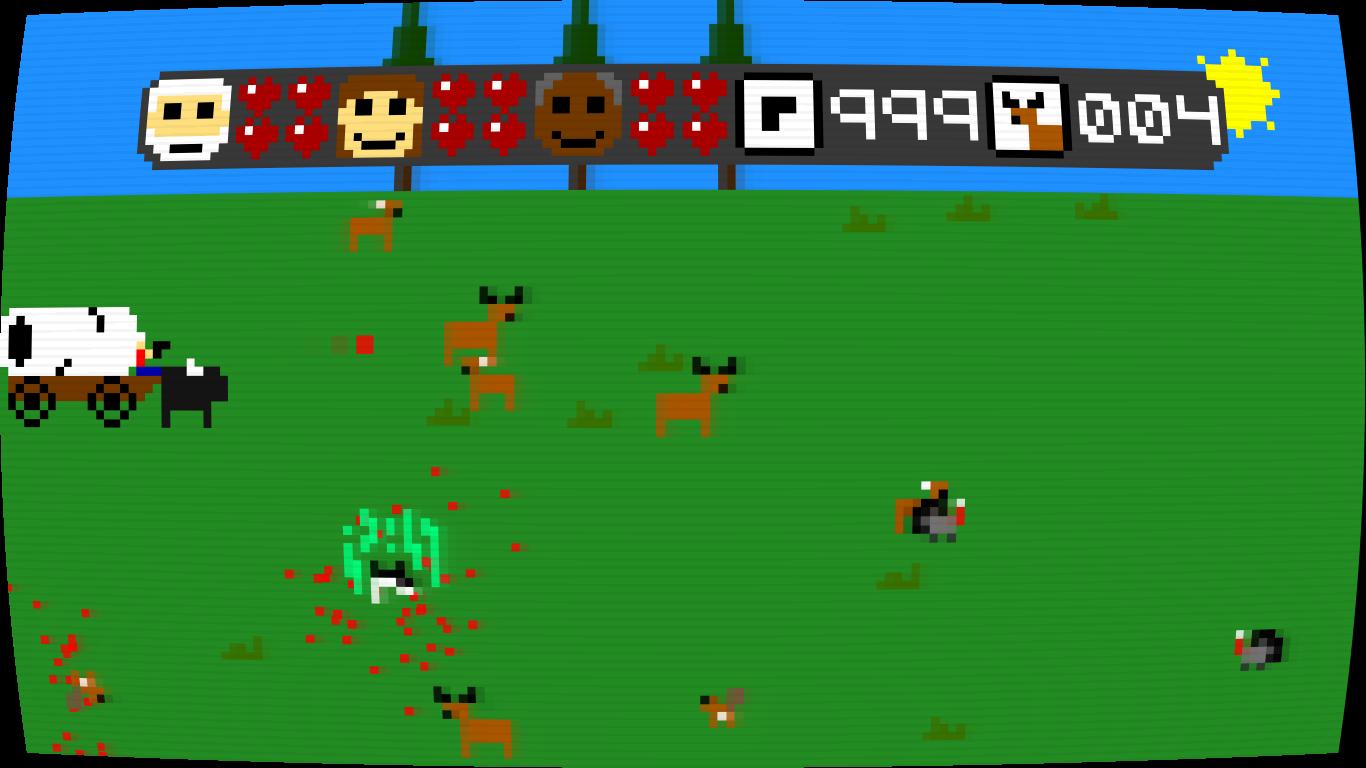 In the 1840s and 1850s, thousands of American pioneers bravely ventured west into the unknown to start new lives in the unsettled territories, their adventurous spirits blazing trails across the country, overcoming hardship and peril in search of an exciting new future. As their travails are a strong part of the American story, it made sense to immortalize their journeys in video game form so future generations could get an understanding of the danger and struggles involved. That game, of course, was The Oregon Trail. That game, though, is not today’s piece of the Big Steaming Pile. Today’s game is Super Amazing Wagon Adventure by sparsevector, released in October of 2013.

Super Amazing Wagon Adventure tells the tale of a group of three pioneers trekking across the country in their titular wagon. You can edit your party with whatever names and faces you like, and set off on their EXTREMELY hazardous journey. Now, while this game is very much a sendup of games like The Oregon Trail, it definitely does not play like it. This is not a game of decision making and resource management. Instead, Super Amazing Wagon Adventure plays mostly like a side-scrolling shoot-’em-up like R-Type or Gradius, and it very much retains the difficulty of that genre. You start off with a rinky-dink infinite ammo pistol with a rather slow firing rate, picking off animals in the forest for animal hides, before being attacked by bandits and eventually coming face to face with buffalo, snakes, vultures, train robbers, bears, and various and sundry flora and fauna that is out to make sure you don’t make it further west than Wichita.

The biggest hook, in my opinion, of Super Amazing Wagon Adventure is that the adventure is randomly generated each time, so while you’ll be making the same trip from the forest to the plains to the desert to the mountains and so on, it will never be exactly the same twice. None of the stages ever overstay their welcome, either, as you’ll blitz from one to another usually in about thirty seconds or so. Also, at certain points on the adventure, you will be asked to make a decision about events like river crossings and investigating strange happenings that can further branch your adventure in different directions, as well as being a nice nod to the material being spoofed here. Thankfully, here, none of these options will get you insta-killed, although making the wrong one (for different values of “wrong”, as any choice is pretty much a complete crapshoot in this game) will probably force you into a rough situation where you’ll have to blast your way out of a tight situation, possibly in a 360-degree shooting stage as opposed to a side-scroller. If you get tired of the normal quest and you’ve unlocked them, you can also fire up one of the other two game modes, Shuffle and Survival, which adds some very welcome variety and replay value.

Well, okay, that’s not the only hook for me here. Super Amazing Wagon Adventure is one of the funniest games I’ve happened upon in a while, managing to strike the perfect balance between complete insanity and deadpan delivery. Along your journey, you’ll get text screens that pop up and describe where you are and what’s happening, like informing you of a massive volcano erupting nearby, or describing the death of a party member in oddly graphic detail. Enemies blow up into bloody chunks that you can collect and swap for supplies if you bump into traders, machine gun-toting bandit wagons can pop out of nowhere to harass you, you might find yourself having to escape swarms of angry giant bees, and one of the available weapon pickups calls in a full-blown airstrike that wipes out pretty much everything on the screen. To top that off, if you encounter certain scenes along the way or accomplish certain goals, you can unlock new wagons to drive cross-country, like The Coal-Fired, a train locomotive that shoots puffs of steam instead of pistol bullets, and The Glitch, a botchy version of your normal wagon that fires off deadly graphical corruptions.

The presentation here is TREMENDOUS, at least for what it’s trying to achieve. The graphics can be summed up as “pixel-y”. Literally everything here is made up of oversized pixels like you would get on a 1980s Commodore 64 or Atari 2600, and that only plays into the humor, as it never failed to get a smile out of me when the text box would describe being attacked by a swarm of angry bears and the visuals would show me being ganged up on by a pack of non-animated brown blobs. The sound is also an awesome throwback to the days of AdLib and SoundBlaster sound cards, with fantastic bloopy effects for the guns going off and some downright majestic MIDI music as the soundtrack. There’s even a bit of distortion to the picture itself to simulate the effect of playing on an old CRT monitor, which is the kind of little touch that makes me think the designers really did their homework here.

Also, much like the original Oregon Trail titles, Super Amazing Wagon Adventure is HARD. I don’t know if this was just a factor of how the game is designed or if it’s another intentional throwback, but regardless, you are not beating this one on the first try. Or the second. In fact, I’m not sure if beating it at all is a question of great skill or just hoping the game pities you enough to not draw any of the hardest scenarios up for you. Oddly enough, though, this kinda works, as you don’t really feel the same level of frustration you would at getting cheaped to death in a normal game, and it does make every bit of incremental progress feel like that much more of an accomplishment. Your party generally starts out with four hit points apiece, giving you twelve total. They can be raised back up by collecting health icons or trading for them, and while twelve hits is a LOT more than you would get in a side-scrolling space shooter, you still can mow through them fairly quickly, especially in stages where hazards are approaching you from behind the wagon, or the enemies home in on you, because you can’t shoot behind you. Not only that, other random events like diseases can drain a character’s health down to one point, and while there’s no way to tell who’s getting hurt when you get hit, it always felt like if there was anyone on the verge of death in my party, that person was eating it.

That said, the quick and frequent deaths definitely didn’t deter me from wanting to keep trying, and I suspect this will be the case for most anyone who picks up Super Amazing Wagon Adventure. The rapid-fire gameplay makes it highly enjoyable for people wanting a fun casual experience, the humor is strong, especially if you’re familiar with the games being referenced to, or just enjoy the actual gameplay at hand here, and the very friendly price point makes it hard to turn down. I highly recommend Super Amazing Wagon Adventure if you’re looking for some lighthearted fun with some serious challenge, or if you just want something to scratch the retro shoot-’em-up itch. Just remember, buffalo buffalo buffalo buffalo.

Is It Worth It? – Yes, big thumbs-up here if you like this style of gameplay or want a well-done sendup of a classic genre.