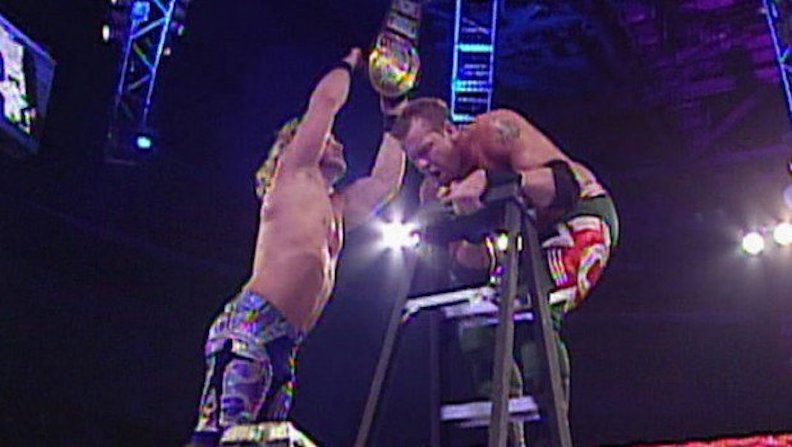 The First Age of Orton has arrived! Though it didn’t last very long. After a stunning victory over Chris Benoit at SUMMERSLAM 2004 – where he became the youngest World Heavyweight Champion in WWE history – the brash Randy Orton was on top of the world! Until his teammates in Evolution turned on him. The faction’s leader, Triple H, has had his eye on winning back the title ever since he lost it at WrestleMania XX, and there was no way he was going to let another member of Evolution having the championship stop him from his goal!

Ric Flair and Batista vs. Chris Benoit and William Regal – After losing the world championship last month, Benoit is relegated to the opener, helping Regal seek revenge on Evolution for the part they played in taking out the slow but lovable Eugene. I have so much appreciation for William Regal’s work. I don’t think he ever got the appreciation he deserves in the ring. With him, Benoit and Flair in the ring, this was a fun opening match, and Batista showed the potential and presence to be a big star. But the other three really carried this match. Benoit finally gets Flair to tap out to the Crippler Crossface, which should be a pretty big moment for the former World Heavyweight Champion, but Benoit’s time in the spotlight was pretty much done.

Women’s Championship Match: Trish Stratus (c) vs. Victoria – Before the match, Stratus argued with Christian about having Tyson Tomko at her side, finally enticing the big man to help her with an invitation to her locker room after match. Christian react by calling Stratus a slut. It’s a much different world than it was 15 years ago. While she may not have been that far above the other women in the division in terms of work rate, Stratus was so much more charismatic than almost every other woman in the company at the time. Stratus retains the title in a pretty good match with Victoria, who had some good momentum going until she attacked Tomko on the outside. Tomko goes after Victoria post-match, when Stevie Richards in a dress comes out and DDTs the bodyguard, setting up…

Tyson Tomko vs. Stevie Richards – Tomko strips Richards down to a pair of women’s underwear with Tomko spitting out some very disparaging remarks towards Richards. I don’t think Right To Censor Richards would approve of his post-RTC antics. At six and a half minutes, this match was five and a half minutes too long. Very little offense for Richards (outside of a claw to Tomko’s groin) as Tomko wins with a swinging neckbreaker.

Intercontinental Title Ladder Match: Chris Jericho vs. Christian – The hype video for this match is really fantastic. There’s really no one better at putting these packages together. Edge had to vacate the title due to injury (shocking!) so former partners Christian and Jericho go at it for the championship in a match that Edge and Christian made famous. I always laugh when I hear Jericho being billed as from “Manhattan, N.Y.,” because most people just refer to Manhattan as New York City. This feud had been brewing for a while, and the intensity between Christian and Jericho just makes everything work here. The brawl outside the ring, the violence with the ladder inside the ring, it all seemed to come between two guys who legit disliked each other, and that helps make a match more fun. Both guys took some scary looking bumps either off the ladder or after hanging from the hook holding the Intercontinental Championship. I bet they were both sore for a few days after this one. Jericho finally climbs the ladder and grabs the title to win in a really great match.

No Disqualification Match: Kane vs. Shawn Michaels – After beating Matt Hardy at SummerSlam, Kane won the right to marry Lita, since Lita was carrying Kane’s baby. As a way to rebel against Kane, Lita signed Shawn Michaels’ name to an open contract against Kane for Unforgiven, even though Kane had taken out Shawn Michaels earlier in the year. This is just the perfect pro wrestling storyline. It’s got fighting, torture, revenge, giants, monsters, chases, escapes, true love, miracles… Wait, that’s The Princess Bride… Normally, I would say it’s a bad idea to give a Kane match 18 minutes, but the inclusion of Shawn Michaels, the No-DQ stipulation plus the marital bickering of Kane and Lita make this worth the time. Announce tables were broken (after a couple of attempts), Shawn Michaels was busted open and eventually counters a chokeslam with Sweet Chin Music to beat Kane as Lita cheered him on. The only thing this match was missing was a stipulation that said if the Heartbreak Kid won, he would have to marry Lita, just so we could have a moment where the born-again Michaels has to explain to her that he’s already married and isn’t really interested.

Backstage, Triple H says Randy Orton spit in his face and the audience loved it, so tonight, he spits in all our faces by walking out of the arena as World Heavyweight Champion. At least the man is honest about it.

World Tag Team Championship Match: La Resistance (c) vs. Rhyno and Tajiri – The tag team scene on Raw was… not ideal in 2004. Sylvain Grenier and Robert Conway could have been a good tag team, but they feel like they took the most boring parts of the Fabulous Rougeau Brothers. And there’s probably a reason why the Rougeaus never won the tag team titles. The champions retain after Rhyno gets hit with a flagpole.

World Heavyweight Championship Match: Randy Orton (c) vs. Triple H – I remember being annoyed when Orton beat Benoit at SummerSlam, because I was all in on seeing some aesthetic changes in WWE at the time. Benoit being on top was more than that. It was a sea change for the company. And when they immediately put Triple H in a position to be Orton’s first challenger, it was pretty clear the direction they were going in, because it made sense in storyline for Trips to be on top, but I was still over him being champion at that point. Between his match with Benoit and this match with Triple H, Orton showed that he was going to be a main event player for years to come. He’s still hanging on 15 years later. In his first (of way too many) match against Triple H, Orton had to battle not just against the challenger. He was also fighting off interference from Ric Flair and Batista, along with an attempt at some crooked refereeing from Jonathan Coachman. A chair shot from Triple H, followed by a Pedigree onto the chair finally ends Orton’s short first reign, but the match positioned him to be an important part of the company for the next 15 years.

Final Thoughts: 2004 was a very underrated year for WWE, with a lot of great talent waiting in the wings to make an impact. Unforgiven was a fun show that was probably unnecessarily maligned because of the way it ended.