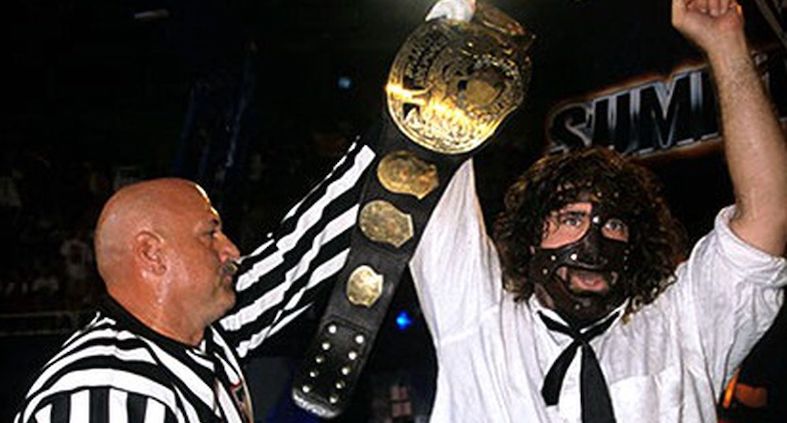 After a bump in the road where WWF was overtaken as the most popular wrestling organization in the country by WCW, Vince McMahon was riding high again on the coattails of “Stone Cold” Steve Austin. The Attitude Era was in full swing. But the most interesting aspect of this show for someone who’d been watching the WWF since the dawn of Hulkamania was the return of Jesse “The Body” Ventura! At the time, Ventura was the governor of Minnesota – the home of 1999’s SummerSlam – and he came back to the WWF to serve as the special referee in the main event.

Intercontinental and European Championship Match: D-Lo Brown (c) vs. Jeff Jarrett – Kicking off a major pay-per-view with a Jeff Jarrett match seems like a mistake, especially when he sends his valet, Debra, back to the dressing room. That gets him some good heel heat before the match even starts. Instead, Debra comes out with the “EuroContinental” Champion, D-Lo. The commentary from Jim Ross and Jerry Lawler is cringeworthy 20 years later, focusing on Debra’s endowments as they were on the match. D-Lo makes the match watchable, instead of a boring slog. Of course, Debra’s problems with Jarrett were a swerve, and Mark Henry interferes by hitting D-Lo with a guitar to give Jarrett the win and both titles.

Tag Team Turmoil Gauntlet Match: Edge & Christian vs. The Hardy Boyz vs. Mideon & Viscera vs. Droz and Prince Albert vs. Faarooq & Bradshaw vs. Crash and Hardcore Holly – A new team enters the match whenever another team is eliminated, and the winners get a shot at the tag team titles the next night on Monday Night Raw. Edge and Christian start with Matt and Jeff Hardy, and there’s a lot of emo in the ring to start off. Actually, looking at the list of participants, this may be the most late-1990s match ever. The Hardys, Edge and Christian go all out in the opening segment, and it’s a little shocking that Edge and Christian managed to continue through most of the match, taking out three teams before finally getting eliminated themselves by Faarooq and Bradshaw. It’s a nice spotlight match for Edge and Christian, even if they didn’t eventually win. I approve of giving Faarooq and Bradshaw the win, though, even if they had yet to open up their protection agency.

Road Dogg comes out to complain about not being included in the Hardcore Championship match, which leads to the WWF pay-per-view debut of Chris Jericho. He doesn’t actually wrestle, he just insults everyone for a while until Road Dogg decides he’s had enough and tells Jericho to “suck it.” Dogg then joins the commentary team.

Hardcore Championship: Big Bossman (c) vs. Al Snow – As soon as the fighting starts, Road Dogg grabs a mic and follows Snow and Bossman backstage. The pet carrier that Snow put his dog Pepper in before the match is clearly empty when they return to the area, as Bossman hits Snow with it before throwing it away and Ross and Lawler show minimal concern for the animal. After LAST MONTH’s match ended with Snow handcuffed outside and Bossman pinning him, the gimmick this month is leaving the arena and going across the street to a bar for the brawl. Snow comes out on top this time for our second title change of the night. Nothing special here, as the WWF keeps trying to top itself in hardcore matches.

Women’s Championship Match: Ivory (c) vs. Tori – Women’s matches in 1999 weren’t worth a damn and just a set-up for one of the women to try and strip the other, so I won’t bother spending any time on this. Ivory wins to retain.

Lion’s Den Weapons Match: Steve Blackman vs. Ken Shamrock – After the match in a circle of cars at the last pay-per-view, the WWF here sets up a mini-Octagon to blow off the feud between the two MMA fighters. Jim Ross says weapons are legal, and there are no pinfalls and no submissions; winner walks out the door. They should have just put the old blue cage around the ring and threw some weapons in. It would have been better for the audience than the mini-Octagon off to the side. I have no idea why there’s a referee at the door AND at the top of the cage. What does that second referee add to the proceedings other than a guy who may fall 8-10 feet? Both guys beat the hell out of each other, but Blackman eschews escaping the cage to beat Shamrock up more. The gambit backfires on him, as Shamrock gets the upper hand and escapes first instead. That seemed like a waste of time.

‘Love Her or Leave Her’ Street Fight: Test vs. Shane McMahon – Ah, the budding romance of Test and Stephanie McMahon, which went absolutely nowhere when Stephanie chose Triple H and Test just kind of faded away from a potential main event story. But that comes later in the year. Right now, Shane is fighting to keep Test away from his sister. The injured Mean Street Posse – my favorite Attitude Era group – hobble to the ring to watch from the front row. The Posse, of course, help Shane out by handing up an increasingly ridiculous collection of weapons, including a Do Not Enter traffic sign and a framed photo of the Posse. I would have loved to have one of those up in my dorm room. Shane does his trademark crazy spots and the match is an insane brawl, with the Posse helping Shane until Pat Patterson and Gerald Brisco – the Stooges – come down to lay them out to a huge pop. As ridiculous as this story and the match was, the crowd was really invested in the match and were louder than anything you hear today throughout the end sequence of the match, where Test got the upper hand and put Shane away with an elbow drop.

World Tag Team Championship Match: Kane and X-Pac (c) vs. The Undertaker and Big Show – Almost two years since he debuted to screw his brother in the very first Hell in a Cell match against Shawn Michaels, Kane is still linked to the Undertaker, even if he’s taken up in an odd couple tag team with X-Pac. The match is pretty good, with lots of craziness going on, but Kane still comes up short against his older brother. X-Pac survives a Big Show chokeslam but can’t kick out after a tombstone to make the challengers the champions.

Kiss My Ass Match: Billy Gunn vs. The Rock – Gunn brings out a heavyset woman and says Rock will be kissing her ass when Gunn wins the match, in yet another portion of the show that would never fly today. Putting the “Ass Man” in a program with a guy who threatens to turn things sideways and shove them right up peoples’ asses seems like a match made in heaven, doesn’t it? Standard Rock match, including a Rock win, and the crowd is into it throughout. Not exactly a memorable SummerSlam match, though.

WWF Championship Triple Threat Match: “Stone Cold” Steve Austin vs. Triple H vs. Mankind – Even though Jesse Ventura is the referee here, they missed a golden opportunity to have “The Body” call some of the matches in the opening hour or so of the show. The man’s voice is iconic and could have produced some great moments. The clips in the video package for this match where he was doing color commentary for Monday Night Raw really made me miss his calling matches, especially with a lot of the crap Lawler was spewing all night. Ventura was the star of the match, even getting the chance to toss Shane McMahon out of the ring when the scion came down to complain when Ventura wouldn’t count a pin after Triple H used a chair. The match was typical of WWF main events at the time – high energy with lots of brawling. The ending, with Mankind pinning Austin to win the title, felt like it came out of nowhere, but the build to those final moments was a lot of fun.