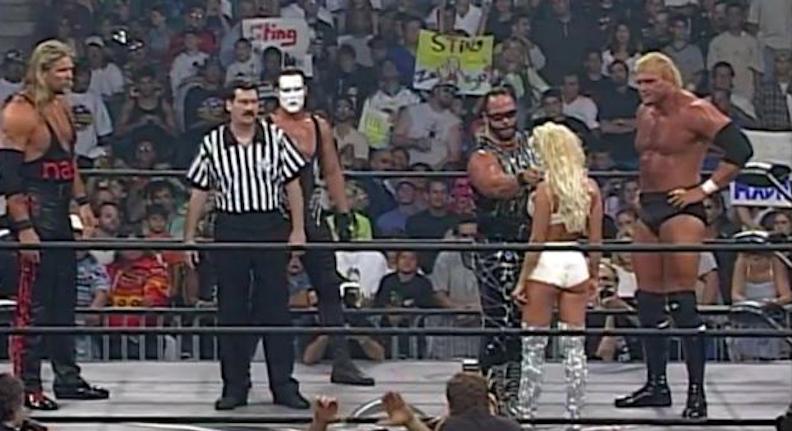 Our inaugural show is a doozy, taking us back to July 11, 1999 in Fort Lauderdale, Fla., for BASH AT THE BEACH, featuring a boxing match, a brawl between 14 guys in a junkyard and a tag team main event for a singles title. Welcome to WCW.

We kick off the show with a bunch of promos. Tony Schiavone and Bobby Heenan teasing the show; “Mean” Gene Okerlund shilling the hotline; Mike Tenay explains (from a junkyard) that President Ric Flair banned all hardcore matches from the arena, so WCW is holding an unsanctioned Junkyard Invitational hardcore match. And this is before Vince Russo came to WCW.

“The Cat” Ernest Miller vs. Disco Inferno – Tony tells the audience that the original stipulation was that the loser can never dance again, but Miller and Inferno complained, so they made it a straight-up singles match. Of course, that means we get a dance contest to start. I’ve gone so long without seeing a Disco Inferno match, and his neon green tights here cause me to grab my sunglasses to watch. There’s so much gaga going on in this match, with Sonny Onoo interfering for Miller and a red shoe being used by both men, which led to Miller getting the win. The WWE-approved music for Miller is terrible, and it does not bode well for the rest of the show.

WCW World Television Championship Match: Rick Steiner (c) vs. Van Hammer – Both Steiner and Hammer look a lot different than I remember them. The lasting effects of the New World Order are still being felt, as I have no idea who is supposed to be the good guy. It doesn’t really matter, neither guy is very good at the whole process. Thankfully, the match only lasts 3 minutes before Steiner retains with a bulldog.

WCW United States Championship Match: David Flair (c) vs. Dean Malenko – I officially regret watching this show. David Flair comes to the ring with poppa Ric, Arn Anderson, Torrie Wilson, a Chyna knockoff and referee Charles “Li’l Naitch” Robinson. Schiavone and Heenan spend the match noting that David Flair is completely useless and undeserving to be champion. The match completely breaks down quickly (and mercifully) as the ref gets knocked out, Robinson takes over, poppa Ric hits Malenko and David pins him to retain. The first 45 minutes of this show have been the greatest waste of time ever, and completely counter to the claim that WCW had a much better undercard than the WWF did at the time.

8-man Elimination Match: No Limit Soldiers vs. West Texas Rednecks – Before the match, we get to hear Curt Hennig and company sing their hit single “I Hate Rap,” which is maybe the best thing WCW did in 1999. Barry Windham on drums in the video is pretty priceless. The No Limit Soldiers consist of Rey Mysterio Jr. (without a mask, he looks like a teenager), Konnan, some guy named Swoll and Brad Armstrong. One of these things is not like the other. You know, I’m not a fan of either music genre, really, but I never could stand Konnan’s character, so I’m firmly on the side of the Rednecks here. The crowd in Fort Lauderdale, though, is firmly on the side of K-Dawg and company. Fifteen minutes for a 4-on-4 elimination match is a little on the short side, but it’s probably best given the talents in the ring. Swoll and Rey-Rey get the win, last eliminating Curt Hennig. So far, the best match of the night, though that isn’t saying much of anything.

Junkyard Hardcore Invitational Match – 14 guys are put in a ring of cars in a junkyard, with the goal of escaping out of a gate. No introductions of the competitors, and even Schiavone and Heenan are surprised whenever they can identify someone in the ring. The lighting is non-existent half the time and the camera frequently goes to an overhead view from a helicopter with a spotlight, which doesn’t help identify anyone. Faulty WCW logic rears its ugly head again, because the ring is so large, and there are so many people in the match, it should be easy to sneak away and run through the exit. But no, we get 14 minutes of this. And after Hak, the former Sandman, tries to send Fit Finlay into a trash compacter and Fit escapes, Finlay does in fact do just this to get the win. What a waste.

WCW World Tag Team Championship Handicap Match: Diamond Dallas Page, Chris Kanyon and Bam Bam Bigelow (c) vs. Perry Saturn and Chris Benoit – The pre-match package for this match seems to focus more on Ric Flair and Buff Bagwell than it does anyone in this match. Actually, all of the video packages on this show seem to have focused on Flair. This is the longest match on this card, which tells me someone knew what they were doing. I can’t imagine any of the remaining matches on this show come anywhere close to being as good as this match. What a great tag team match that needed zero context to enjoy. The Jersey Triad had the numbers advantage and, while Saturn and Benoit were able to neutralize it for most of the match, it eventually was too great an edge and the champs retain.

Boxing Match: Buff Bagwell vs. “Rowdy” Roddy Piper – I know Piper trained a bit as a boxer, and he had that big “boxing” match with Mr. T at WrestleMania 2, but I can’t believe anyone thought this was a good idea. Although, if the alternative was an actual match between Piper and Bagwell, maybe this was the way to go. Judge Mills Lane is the special guest referee here, because WCW needed to find the one guy more annoying than Buff and a rambling Piper to join this match. Flair is in Piper’s corner here, because we haven’t seen him nearly enough on this show. To counter Flair, Buff brings out his mom, who is wearing an airbrushed T-shirt with her and her son on it. This is like a fever dream, and the bell hasn’t even rung yet. I remember watching the WrestleMania 2 boxing match with my grandfather when I was a kid. He was a boxing fan, and he was horrified at the mockery they made of boxing. I’m not sure this was as bad as that match, but it definitely wasn’t anywhere near as entertaining. Bagwell wins when he pinned Piper after Judy Bagwell put a bucket on Piper’s head and then Buff hit him with a Blockbuster.

I take it back. It was so much worse than the Mr. T match. The ridiculous stipulations aren’t over yet, though. We’ve got one more big one coming.

WCW Heavyweight Championship Tag Team Match: Kevin Nash (c) and Sting vs. “Macho Man” Randy Savage and Sid Vicious – Part of me admires how willing WCW was to throw logic out the window for the sake of a terrible story. According to the rules of the match, even Sting, Nash’s partner in the match, will have the opportunity to pin Nash to win the world heavyweight title. How does that even work? Why not make this a four-corners match? Schiavone even says it’s “like a four-corners match, in a way.” Buffer calls Sting “WCW’s own unique manic individual” and I have to wonder how this copy makes it through to make it on camera. Nash starts the match on the apron as Sting goes up against Savage and Vicious, and I can’t help but wonder: why would Nash tag in? Just walk away with Savage’s woman Gorgeous George and enjoy the rest of the evening. He can only lose his title if he’s pinned, so walk away. The match is, like, 10 minutes of build to Gorgeous George swerving Nash and giving him the worst shot to the groin I’ve ever seen. Sid sets Savage up for the big elbow and Savage gets the pin and the title. Sid really is psycho. And the show goes off the air as Schiavone is in mid-sentence. I wonder if the WWE Network cut some stuff out of the end of the show.

Final Thoughts: Outside of the elimination match and the tag team title handicap match, this was a complete waste of time.