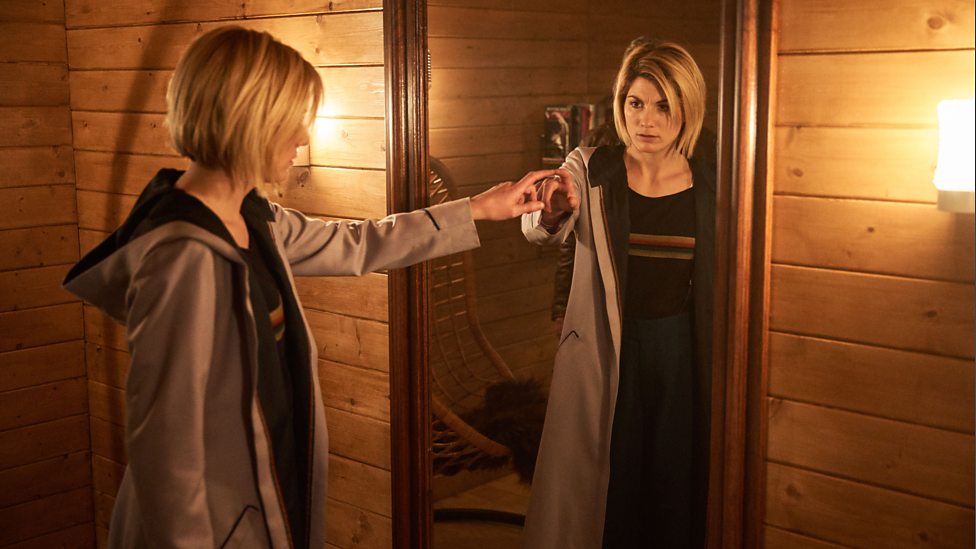 An excellent adventure that throws twists and tugs at the heartstrings.

At first glance, “It Takes You Away” appears to take its cues from the modern horror scene, with its creepy isolation, unseen monster and repeated titular phrase recalling flicks like A Quiet Place. But first-time Doctor Who writer Ed Hime doesn’t follow the obvious path. Instead, this episode ends up being far more out-there and emotional than its opening segment suggests.

It still kicks off strong though! The Doctor and friends arrive in 2018 Norway, where they stumble upon a barricaded cottage. There, they find a terrified blind girl named Hanne, who lives in the cottage with her dad Erik, having moved there after her mother died. Four days ago, her dad vanished. Ryan, who notably has some father issues, thinks he ran off and abandoned her. But a monstrous roar suggests otherwise. Normally, this would be where the creature attacks or causes some damage. Instead, Graham finds a mirror in the attic that doesn’t show his reflection. It’s a portal to another dimension. So of course, The Doctor, Yaz and Graham go through the portal while leaving Ryan to watch Hanne.

Arriving in a world between worlds, the trio run into a creepy alien named Ribbons of the Seven Stomachs. His design is closer to a demon on Buffy than something you’d expect out of Doctor Who, and he’s played with slimy delight by Kevin Eldon. While Ribbons agrees to lead our heroes to Erik in exchange for The Doctor’s sonic, he quickly betrays and threatens them to get his promised gift early. But even he’s not immune from the dimension they’re in. During the struggle, Ribbons attracts and is attacked by flesh moths, which rip the skin from his bones. It’s gross. The Doctor, Yaz, and Graham run through another portal, only to wind up in the same cottage within a parallel universe.

So, what about that monster in the woods? Ryan discovers that the roaring monster is a recording playing out of a nearby speaker. Hanne knocks him out before he can deliver the news, traveling through the portal to find her dad. Speaking of, the TARDIS team finds Erik in the parallel house, admitting that he left Hanne for a few days and created the monster recording to keep her out of the woods. He did this to be with his deceased wife, looking alive and well in this dimension, although she remembers dying. The cottage also has another visitor in this dimension: Grace. This is devastating for Graham, as both he and Grace know that she can’t possibly be real.

The Doctor tries to work out what this strange world is and why there’s a buffer dimension preventing it from ever touching the reality they know. She remembers a story from her youth about the Solitract. It’s a myth about a consciousness that existed before the beginning of the universe. While reality had all the pieces to come into existence, it couldn’t work with Solitract energy present. So our universe…somehow pushed the Solitract out into a separate reality so it could come into being. With that, The Doctor surmises the world is a trap for the being to seek companionship, with impersonations of deceased loved one as bait.

The challenge with such a long-running series as Doctor Who is when these new ideas about the fabric of reality arrive having never been referenced before. It could’ve been a major flaw of this episode, except for the performances and pathos put on in the climax. Erik and Graham have trouble believing The Doctor, but when Hanne comes through the portal, she quickly surmises that the woman there is not her mom. It takes Hanne rejecting the fake for it to force her out of the dimension.

With that, The Doctor springs into action. Knowing that the parallel universe will collapse with them in it, she uses all her persuasion to convince Graham and Erik to reject the fake loved ones. Jodie Whittaker is brilliant here, going from coldly describing fake Grace as furniture to relating to his guilt about her death. Graham finally rejects Grace when she ignores his pleas for helping saving Ryan, trapped in that buffer zone. As for Erik, The Doctor, with her centuries of experience, offers herself as a better friend for the sentient being. When it starts to embrace her instead of Erik, he realizes that’s it’s not his wife.

With everyone out but The Doctor, the Solitract takes the form of…a frog with the voice of Grace. Cause why not? It wants The Doctor to stay with it forever, but it can’t stabilize with her in its plane of reality. The Doctor gives a moving speech about the wonder of the universe as well as the Solitract’s own beauty. In a few sentences, the Solitract gets across the endless loneliness it feels, but agrees to let The Doctor go. You may get your heartstrings pulled by a talking frog. That’s Doctor Who for you!

To close, Erik and Hanne decide to return to their city life and move on from their loss. Graham’s still processing his emotional scars that were just ripped open again. But while Grace may be gone, he still has family. Ryan finally calls him “granddad.” It’s a wonderful moment to close this week’s wild ride.