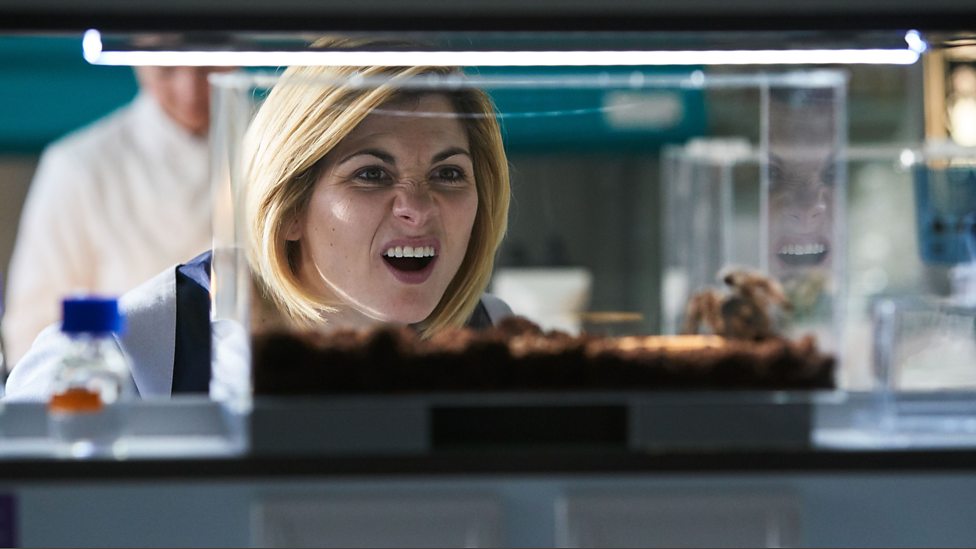 Spiders…why did it have to be spiders?

Similar to how last week’s episode leaned into its origin as a historical, educational show, “Arachnids in the UK” is a creepy throwback to Doctor Who’s gothic-horror phase. Just in time for Halloween, this episode leans into B-grade monster movie territory, but with enough freaky moments and superb characterization to make it stand out.

We kick off with The Doctor getting her friends back to Sheffield, after many failed attempts. In a great scene, The Doctor is reluctant to leave her new friends and resume her travels by herself. Jodie Whittaker does a great job playing The Doctor’s loneliness, where she also doesn’t want to push herself on her companions to join her. But she jumps at the offer of tea at Yaz’s. We get to spend some time with Yaz’s family, giving her some additional characterization. In a nice bit of realism, her family is normal, with only the usual dysfunction found in all households. Her dad is aggravated by a garbage situation and her sister always teases her.

Meanwhile, Yaz’s mother, Najia, is fired from her job as manager of a luxury hotel owned by Jack Robertson, a wealthy, rude American businessman running for President in 2020. Hmm, sounds familiar! Of course, the only thing that stops Jack from being a stand-in for Trump is that he’s aiming to run against him in two years. Najia is axed just for unintentionally interrupting him as she tries to go about her work prepping the hotel.

But the character work isn’t left solely to Yaz and her family. Graham returns to his home alone for the first time since Grace died. With just his expressions and a very few words, Bradley Walsh gets across the full weight of the loss of his wife. It’s a quiet, touching scene.

But both The Doctor and Graham separately discover that all is not quiet in Sheffield. The Doctor, joined by Dr. Jade McIntyre, a specialist in spiders, finds a dead neighbor wrapped in cobwebs. The culprit? A spider the size of a dog. Graham rejoins the team, having found one in his loft. And Yaz is heading towards the center of the incident, the hotel where her mom got fired.

The Doctor, Ryan and Yaz make their way to the hotel, with perfect timing, as a giant, bath-sized spider breaks through the porcelain in one of the hotel rooms. Jack leaves his bodyguard to die, cause he’s an awful person. He runs into The Doctor and team and they all try to escape, only to find that the spiders have already webbed over the entrance.

After looking at the hotel plans, The Doctor learns that it was built on former coal mines. Heading down into those tunnels, the team discovers several people wrapped in webs. The spiders’ behavioral patterns are all disrupted thanks to their sudden increases in size. They further discover that those mines are a dumping ground for industrial waste. The company that handled the waste is the same one that discarded a spider that Jade’s team was experimenting on, thinking it was dead. All owned by Jack, who of course cut corners in the name of profit. The result? Giant monster spiders, right out of the classic sci-fi playbook.

The Doctor figures to lure the spiders into Jack’s panic room to kill them humanely. They need to attract them with vibrations though. Ryan recommends Raze. What’s Raze? Sheffield’s sickest grime station! To the beats of Stormzy, the spiders come scurrying. All but the biggest one are trapped in the panic room. And that spider has grown too big for its body to handle. Before The Doctor can give it a humane death, Jack shoots it. And then he leaves. He doesn’t get eaten, he doesn’t get arrested or dealt with by The Doctor. He just walks away. You would hope he’d get his comeuppance by Chris Chibnall’s story doesn’t give us the satisfaction of an easy win.

But their time back home gives Yaz, Ryan and Graham some perspective. In an excellent ending, the three of them approach The Doctor and ask to join properly in her adventures. Graham doesn’t want to mourn Grace in an empty house and Ryan and Yaz want more out of their lives. The Doctor warns them that it will be dangerous, and they won’t return as the same people they are now. Her official companions are fine with that though and ready for the journey.

With that, Team TARDIS is officially a-go! Off to the next adventure!