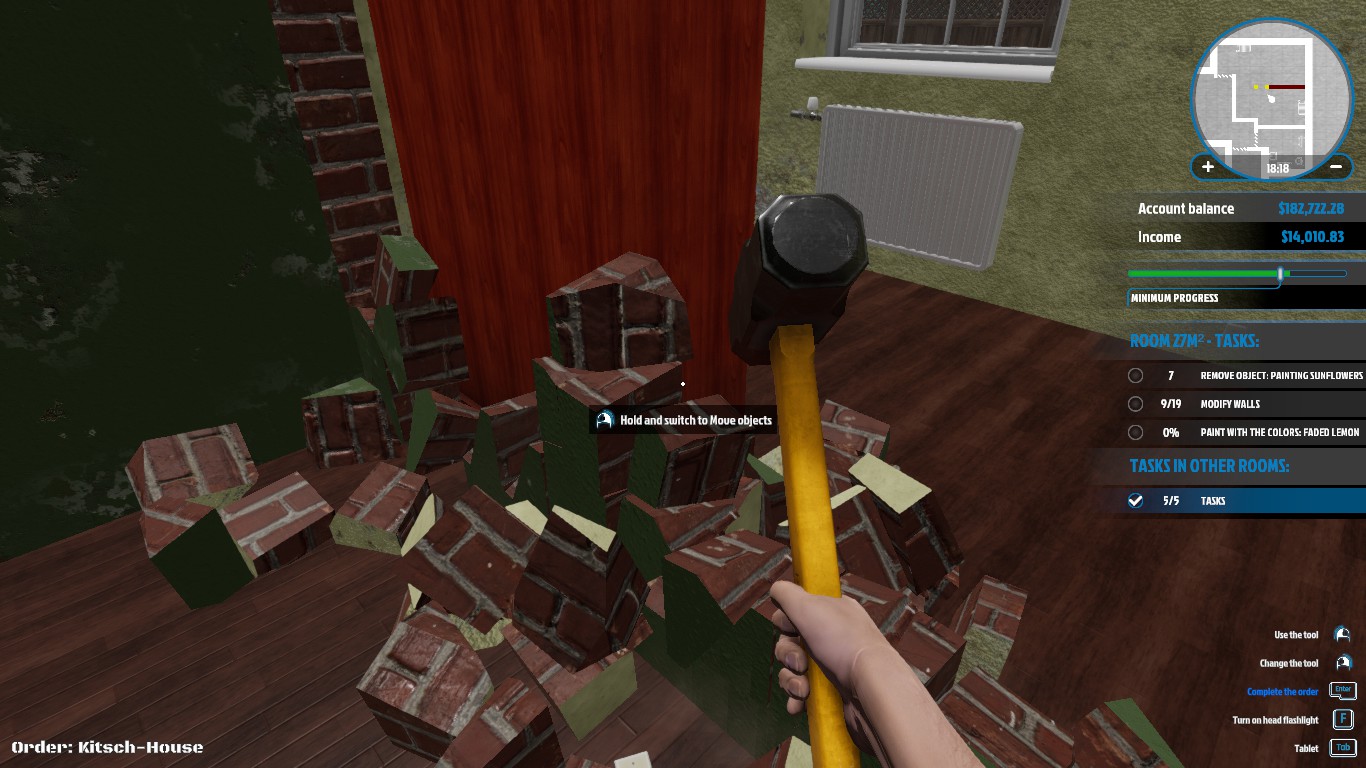 One of the beautiful aspects of video games is that they allow people to get a feel what it’s like to do things they wouldn’t be able to do in real life.

This can include leading a life of major crimes, suiting up for a professional sports franchise, or being a sentient piece of bread in search of heat sources with which to become toast. Of course, through this same medium, you can also simulate the experience of doing things that, well, you could do in real life, but wouldn’t be inclined to do normally for whatever reason. I mean, I could get a commercial driver’s license and become a long-haul trucker in the Southwest, but that’s a very time-consuming goal. I could become a speculator that buys failing houses and renovates them for profit, but I don’t have the start-up capital, nor do I particularly enjoy getting dirty. Lucky for me, then, that Empyrean and Playway S.A. have solved both of those problems, bringing us today’s piece of the Big Steaming Pile, House Flipper, released in May 2018.

As it says on the metaphorical box, House Flipper has you assuming the position of a professional renovator/one-man real estate office, with the goal of buying dilapidated properties and fixing them up, installing appliances, repairing structural damage, re-wiring electrical sockets and fuse boxes, cleaning up the messes left by the previous owners, and decorating, turning mold into gold along the way. You start with a tiny little shack for an office (which could use some TLC itself), using your laptop to peruse the various house listings.

Of course, you may have to put some of those dreams of being a tycoon on hold at first. You don’t exactly start out with the money to buy up large properties and turn them into full-blown mansions. To generate enough capital to embark on a career in flipping houses, you’ll be taking contractor jobs from a litany of homeowners, some who simply want cosmetic changes like new colors of paint on the walls, to some who want a more complete overhaul of their residence. Aside from serving to build up your bankroll, these contractor jobs serve as a de facto tutorial mode, allowing you to get a feel for how to perform the various tasks involved without the pressure of putting your own money on the line; even the tasks you need to complete are very specific, down to exactly what color of paint the customer wants, so you don’t even have to worry about a clash of personal tastes.

When it gets time to start doing the dirty work, you’ll find that the actual gameplay here is extremely basic. For example, to start painting walls, you press Tab to open your PDA, click on the Store tab, scroll down to the color paint you want, plop the can on the floor, load up your roller, walk over to the wall, and just press and hold the left mouse button to paint. There’s no having to move the mouse up and down to simulate moving the roller back and forth, no worrying about dripping any on the floor, no covering over electrical outlets, just click and hold the button, and voila, you’re paintin’! Installing features like wall-mounted air conditioners or bathroom fixtures is similarly simple; a part like a screw or a wire is highlighted, and again, you just press and hold to connect the wires or fasten the screws or attach the pipe. For those looking for a greater challenge, you can adjust the difficulty of these events to not provide you with the highlights and force you to remember what each step in the process is, but even then, there’s no real penalty for clicking anything out of order; you’re not gonna electrocute yourself installing a wall socket because you clicked the wrong wire first. In fact, I would argue that the most involved task in the entire game is cleaning windows, because there, you hold down the mouse button AND drag the mouse around to move your squeegee around the glass; that’s the level of simplicity we’re working with here.

Now, while this may not sound terribly thrilling and frankly, rather repetitive, House Flipper works largely because of that user-friendliness. After a while, you cease thinking about each task being a series of mouse clicks and start thinking of the overall progress you’re making, and it’s an oddly satisfying feeling looking at the before and after of a project as you turn a condemned dump into a lovely home for a nice virtual family to move into. Much like American Truck Simulator, there’s something hypnotic about the low-intensity gameplay, especially once you move into the actual flipping aspect of the game and begin thinking about design and decor: should this room be a study or a family room? Would this bathroom look better with bright wallpaper or dark wall tiles? Should I knock down this wall and put an island in the kitchen? And on the upside, while I can’t say with certainty, the game certainly feels realistic enough; I am not a professional contractor, but I’d imagine the steps involved in installing a toilet are pretty much the same in reality as they are here, even if the actual labor is a skosh dumbed down here. Also, to make things even easier, along the way, as you gain more experience with certain tasks, you can unlock skill points that allow you to do things like pick more trash up faster, knock down more sections of a wall with a single hammer swing, or save on how much paint you use each time you load the roller, which can save more than a few bucks over the course of a project.

It should also be noted that when you start selling your houses, you do have to keep the wants of potential buyers in mind. There’s a limited pool of buyers available, and each one kinda has a completely separate vision for what they’re looking for in a property; a young family needs a room filled with things that a small child would like, a buyer who wants to rent a house out might want two bathrooms, and a survivalist type might want some the underground bunker loaded with supplies and provisions in case society breaks down…that’s not a joke, by the way, some houses actually feature underground bunkers and survival gear has its own page in the store catalog. While you’re effectively free to design your houses however you like, a buyer who sees more boxes checked is willing to pay more for your property, so in some cases, you might be better off zeroing in on one specific person and what they’re looking for out of a house, before you decide to start slapping down antique furniture in the room with the giant modern home entertainment system.

While I don’t have any glaring flaws to point out here, there are a couple of things I think can be improved upon as time goes on. First, like I said, different buyers have different wish lists for what they want, but they can be very vague as to what that actually constitutes; you might think that a living room is the same as a family room, but unless you have certain items in that room, the game, and subsequently, the buyer, won’t see it as such. There’s even one buyer who doesn’t want a kitchen in their house, and while I am not the most well-traveled person on the planet, I have never been in a house that didn’t have an area that you could describe as a kitchen. Second, pretty much everything that you’re doing takes place indoors, you can’t mow the yard, you can’t plant a garden, you can’t put a gazebo up in the backyard, you can’t even take items like a couch and temporarily move them outside if you need to get to something or clear out some space; the outside literally seems to exist only for the purpose of realism instead of being part of the property like it would be in reality. Third, and this probably isn’t an issue for most people, if you’re playing this on a laptop, you’d be well-advised to have a USB mouse with a wheel handy, as rotating items requires the mouse wheel, and if you don’t have one or you have a setup where you hold both buttons on the touchpad down and scroll that way, well, you’re kinda stuck hoping no beds or appliances need to be rotated.

Those things aside, I thoroughly enjoy House Flipper, and there’s no question that a game with such a unique premise deserves a spot here at the Big Steaming Pile. If you’re the kind of person that enjoyed tinkering with the Build Mode and Buy Mode in The Sims, it’s definitely up your alley, and the gameplay, while basic, certainly finds a workable balance between realism and smoothing the processes over for folks like me who are barely handy enough to change a light bulb. I’d recommend House Flipper if you’re looking for a strong effort at a home renovation sim or you’re looking for some nice, relaxing fun to unwind with, just don’t forget to always check the windowsills for dirt. Cleaning the whole house means cleaning the WHOLE house, buddy.

Is It Worth It? – If you’re the kind of person that enjoyed building and decorating houses in The Sims as much as actually playing The Sims, no question.